The Politico's Jonathan Martin says "Ya can't make it up":

The New Yorker says it’s satire.... [Sunday Afternoon, Obama was asked] “The upcoming issue of the New Yorker, the July 21st issue, has a picture of you, depicting you and your wife on the cover. Have you seen it? If not, I can show it to you on my computer. It shows your wife Michelle with an Afro and an AK 47 and the two of you doing the fist bump with you in a sort of turban-type thing on top. I wondered if you’ve seen it or if you want to see it or if you have a response to it?” 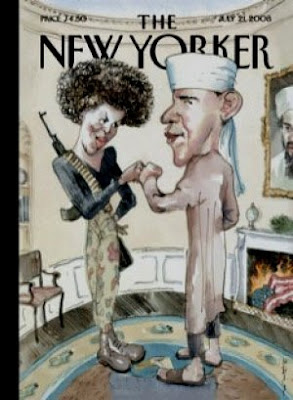 ...I’m sure Senator Obama is oh-so appreciative for The New Yorker’s help.

It would've been even better had Rezko, Wright, Ayers, Dohrn, Farrakhan, Khalidi and Said been depicted.

As for the much-ballyhooed "politics of fear" charge, exactly who is culpable now?

... and they're in the oval office, burning the US flag, no less. I find it funny how much of this kind of 'fear' crap the left has put out in the name of saying "watch out, the right is gonna use fear!". Holy crap, people, the 'right' hasn't done any of this stuff, and McCain won't tolerate anyone on his team saying anything remotely controversial. I've never seen a more blatant display of 'projection' than what is going on with the 'left' in this regard. Fearmongers, indeed...

Spokesman Bill Burton said in a statement: "The New Yorker may think, as one of their staff explained to us, that their cover is a satirical lampoon of the caricature Senator Obama's right-wing critics have tried to create. But most readers will see it as tasteless and offensive. And we agree." [Ed: There are some of us who think it's frickin' hilarious.]

...Howard Kurtz of The Washington Post said Sunday on his CNN media show “Reliable Sources” that the cover is arguably "incendiary... I talked to the editor of The New Yorker, David Remnick, who tells me this is a satire, that they are making fun of all the rumors,” Kurtz added.

Clarence Page of the Chicago Tribune defended it as “quite within the normal realms of journalism,” adding that “it's just lampooning all the crazy ignorance out there.”

Was this a painting or did the New Yorker just take a picture of the two at their home?

Posted By: JD | July 13, 2008 at 06:47 PM
Has anyone seen how George Bush is portrayed on the cover of, say, Der Spiegel? It's nice to see ridiculous caricatures at the expense of the Left.

Posted By: Jim | July 13, 2008 at 06:47 PM
I understand that this cover is supposed to be satirizing the Right. So why is the Obama campaign spokesman saying it's tasteless and offensive? Doesn't he "get it"?

Posted By: Karl | July 13, 2008 at 06:50 PM
What, and Republicans have never been satirized before? You guys are such whiners! Why is this cartoon more offensive than the dozens of others I've seen on this site of Bush, McCain, Obama, AND Clinton?

Posted By: sydney | July 13, 2008 at 06:50 PM
The ONLY thing that's offensive is that the leftwing media suggests that the ONLY reason anyone would not vote for Obama is because they're racist. When the reality is that he has ABSOLUTELY NO EXPERIENCE for the job, whatsoever. It's infuriating and will bring even more conservatives out to vote against him.

Posted By: le commentor | July 13, 2008 at 07:12 PM
I could care less if Obama is pictured as a Muslim. Picture him instead as the most inexperienced candidate for the Presidency since William Jennings Bryan, the most liberal since the last Democrat to run, and the least knowledgable about everything from foreign affairs to tax policy. And this is what the Democrats intend to foist on us? Who are they kidding? Bring back Al Gore and John Kerry - at least they were just losers, not dangerous losers who are naive beyond imagination.

Posted By: James Marsden | July 13, 2008 at 07:15 PM
Now, imagive if it were a picture of McCain in an angry rage while rolling around in a wheel chair with an IV hooked up to him, you upset Obama supporters would all be laughing your tails off, right? Face it... you're hypocrits.

Posted By: Hermann | July 13, 2008 at 07:18 PM
What a filthy, disgusting cover! Sounds like this is the work of Karl Rove and his protoges' who have just gone to work for McCain... [Ed: the close ties between Karl Rove and the New York art & literature scene are well-documented.] ...We are cancelling our subscriptions! We will never read another copy as long as we live.

Update IV: A montage of hilarious progressive satire, the responses to which included nary a complaint. 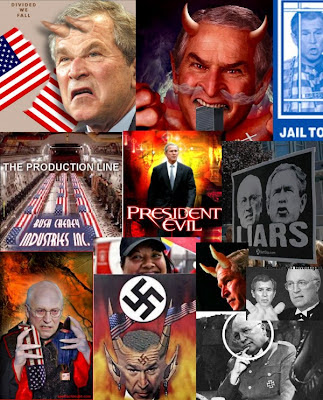 I think the idea that the Obamas are branded as unpatriotic [let alone as terrorists] in certain sectors is preposterous. It seemed to me that depicting the concept would show it as the fear-mongering ridiculousness that it is.

Care for a heaping helping of "Fairness Doctrine"? 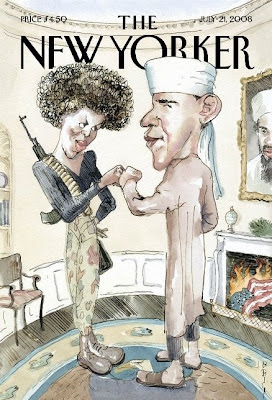 The ill-named AmericaBlog: "A liberal media that bends over so far backwards to be "fair" that it becomes just as bad as FOX News."

RawStory: "'This is as offensive a caricature as any magazine could publish,' one high-profile Obama backer told ABC News, 'and I suspect that other Obama supporters like me are also thinking about not subscribing to or buying a magazine that trafficks (sic) in such trash.'."

Daily Kos: "The New Yorker Obama cover: OMFG, WTF? ...There's no other ulterior motive to publish cartoons like this right? ...This is disgusting. Might be worth cancelling a subscription or two."

New Republic Blogs (Isaac Chotiner): "No one would have even noticed it--certainly no one in the right-wing nut-o-sphere--if they'd just kept their mouths shut. Now we're going to get all this protest-too-much commentary..."

Taylor Marsh: "What's missing is Sean Hannity placing the flag into the fireplace."

Polimom: "I mean… an Afro-wearing, AK47-slingin’, boot-stompin’ Michelle fist bumpin’ a Muslim Barack in the Oval Office? With Osama AND a burning American flag? Couldn’t the artist jam any more paranoia into one cartoon?"