The Enquirer has another scoop regarding one-time Democratic presidential wannabe John Edwards:

John Edwards’ mistress, Rielle Hunter – the mother of his “love child” – has been secretly receiv­ing $15,000 a month as part of an elaborate cover-up orchestrated by the former presidential contender. 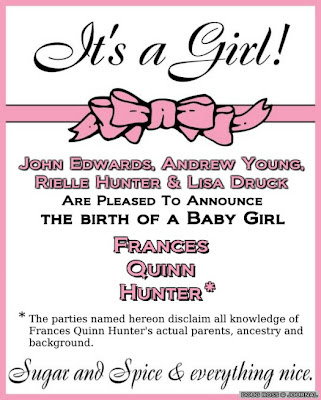 The money is being funneled to Hunter by a wealthy colleague who was closely tied to the Edwards’ campaign. This same man is also shoveling cash to Edwards’ pal and former aide Andrew Young – who tried to take the heat off the ex-Senator by claiming he is the father of Rielle’s baby.

Her name is Frances Quinn Hunter, and she was born at Santa Barbara Cottage hospital. Edwards' good friend and former aide Andrew Young stepped forward last December by claiming to be the father of the child (he's married with kids himself), but the Enquirer reports that he too is receiving cash from the same guy who is paying off Hunter. A few weeks after the story first broke at the end of last year, the Enquirer noted that Hunter was "living in Chapel Hill, N.C. in a gated community, just a few streets away from Andrew Young," and that she had been spotted around town driving a BMW registered in his name. Young hasn't been heard from since. (Maybe the house in question belonged to Edwards backer, Tar Heel, and former NBA center Eric Montross?

...Whether the money is enough to keep Hunter quiet remains to be seen—she's supposedly in the process of securing an interview with a major network. Edwards has yet to address the latest crop of rumors directly, and he won't have to until a mainstream outlet asks him to do so. Which may not happen for a few weeks because the Enquirer says it won't release the photos from the Beverly Hilton ambush, and the MSM seems to have unilaterally decided not to do anything until they are released.

A commenter on Radar uses the handle RielleHunter to further develop the story.

The moneyman was Celtics player Eric Montross who also has been paying $8500 a month to ex-Edwards campaign manager Andrew Young, who coincidentally acknowleged untested paternity of female baby Frances Quinn Hunter-Edwards on her birth certificate.

By the time the baby turns 18, that will be more than SEVEN MILLION DOLLARS!

“We drew ‘em a road map to the story. All they had to do was follow it and do a little basic reporting. We did it. Fox did it. They can, too–if they want to.” 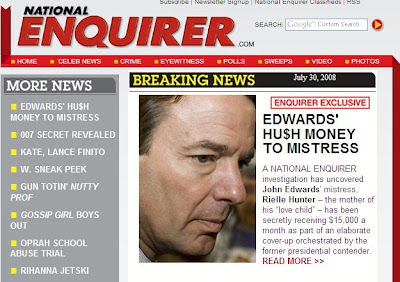 Usually a story like this moves as media outlets swarm in to investigate, but today over a week after the Enquirer revived the story — the mainstream media is still mum...

Kaus postulates that the blogosphere is operating as a "minor league" for the MSM, where stories "try out" and sometimes break through. That's probably not a bad analogy.

One problem with the "minor league" analogy: When a player goes to the show, they don't have any problem mentioning where he came from.

Update IV: Larwyn points me to Don, who points me to Ann, who is responsible for a mouthful of ice tea on my keyboard.

To put it another way, it would appear that ambulances aren't the only things John Edwards has been chasing lately...

...Which brings up a fascinating legal question: Would it be admissible for Edwards to channel the very love child at issue during such a [paternity] proceeding? Reminiscent of his performances in medical malpractice cases, he could say: She speaks to you through me and I have to tell you right now -- I didn't plan to talk about this -- right now I feel her. I feel her presence. She's inside me, and she's talking to you, she's saying: "John Edwards ain't my daddy!"

at 6:51 PM
Email ThisBlogThis!Share to TwitterShare to FacebookShare to Pinterest
Labels: Edwards