The ultra-right wing New York Magazine relays the latest Beta O'Rourke news. Beta, you may recall, is running for the Senate in Texas against Ted Cruz. Oh, and Beta is the name he prefers, I hear.

...a new story in the Houston Chronicle claims that there’s an important part of the story that the Texas Congressman hasn’t addressed. According to records acquired by the paper, O’Rourke was not only nabbed for driving under the influence; he caused what could have been a catastrophic accident, then tried to flee the scene. Neither detail had previously been made available to the public. The Chronicle reports:

“State and local police reports obtained by the Chronicle and Express-News show that O’Rourke was driving drunk at what a witness called “a high rate of speed” in a 75 mph zone on Interstate 10 about a mile from the New Mexico border. He lost control and hit a truck, sending his car careening across the center median into oncoming lanes. The witness, who stopped at the scene, later told police that O’Rourke had tried to drive away from the scene.”

The 1995 records, obtained from the Texas Department of Public Safety, are based in large part on the testimony of a witness who reported seeing O’Rourke’s vehicle speed by him at 3 a.m. on September 27, 1998. After the accident, the same witness helped prevent O’Rourke from leaving the aftermath of the accident.

In other words, Beta hit-then-attempted-to-run, all while drunk. 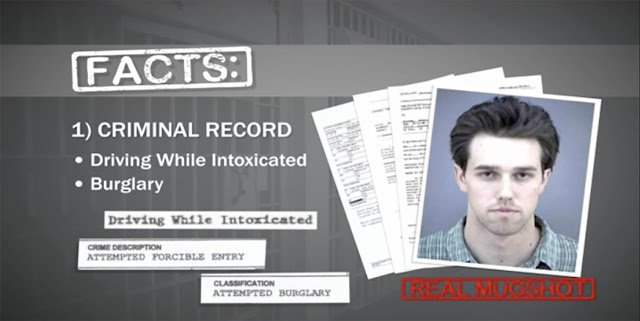 Beta was also arrested for burglary, according to the super right-wing, Tea Party, Constitution-supporting fact checker known as... Politifact:

My brothers and sisters in Texas: you know what to do in November.

Send the Democrat Party back to their George Soros Memorial Hate America bunker, with their tails between their legs. This Beta fellow deserves a particularly humiliating denouement on election day.

Beto is Mex short for Robert. He's culturally appropriating the nickname to pretend he's Hispanic. He's trying to out-Hispanic the real Hispanic, Ted Cruz. He even sports a tanning bed tan. But he's Irish through and through, with a DUI, pretty-much hit-and-run that he had quashed because he's so privileged. Shades of Ted Kennedy.

He's all phony and all fraud.

There's a supposed large following of Beto. I have the feeling his popularity is like other Socialist politicians, and only created by the media.