During a speech Friday at George Washington University, Karl Rove had some harsh words for Barack Obama. Rove said Obama's actions in Congress are at direct odds with his claims that he will strengthen the military and intelligence communities to fight terrorists around the world.

In reaction, the fever swamp at ThinkProgress erupted, with the death threats coming fast and furious.

What’s to say? he knows he’s a traitor, and shouldn’t be surprised when he’s finally strung up.

And no, those are not horns and a tail, those look like neckbolts and a falafel.

Greatest facilitator of executive corruption in the 20th century! Ed: evidently the work of a youngster who missed the entire Clinton administration

(JBaddo:) We can arrange to have this guy found dead in a remote area at some point in the future. It doesnt have to be next week or a month from now. But it will happen. I just need donations from interested parties to make this happen. 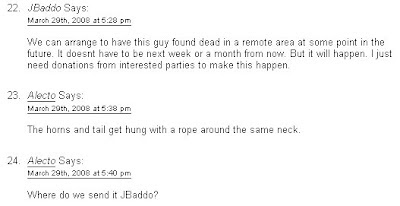 The horns and tail get hung with a rope around the same neck.

Where do we send it JBaddo?

So you use a rope soaked in holy water. Just to make sure use silver bullets and a stake through what’s left of his heart.

I don’t know about tail and horns, but I know no heart when I hear it. He shows the same indifference to human loss as Cheney and deserves the same fate, namely trial at the Hague for crimes against humanity and the same fate as those tried at Nuremberg.

Rove is clearly a War Criminal and inherently an Evil Human Being. Right along with Cheney and the rest of the Krime Kabal that has resided at 1600 Pennsylvania Avenue the past 8 years. I don’t know about you guys buy it sure seems a hell of a lot longer than 8 years. A place in Hell is waiting for Bush, Cheney, Rove, Rumsfeld, Rice, Hadley, Wolfowitz, Powell etc. Pace, Gates, Patraeus will surely be there, too.

…and I thought TREASON in America was punished by death.

There's nothing like the enlightened left, where diversity of opinion and freedom of dissent are nowhere to be found. Instead, an echo chamber of homicidal silliness: Kill 'im! Nuremberg! String 'im up!

The Democrat Party is no longer just the Party of Weakness. It is also the Party of Outright Lunacy.
at 6:15 AM
Email ThisBlogThis!Share to TwitterShare to FacebookShare to Pinterest
Labels: Democrats, extremism