The best of Barack Obama's friend, Pastor and inspiration


Actually, Jeremiah Wright is not simply Obama's Pastor, close friend and an inspiration; he also has a formal role on the campaign staff. Wright is a member of Obama's "African American Religious Leadership Committee."

ABC, The Washington Post and Fox have the money quotes: 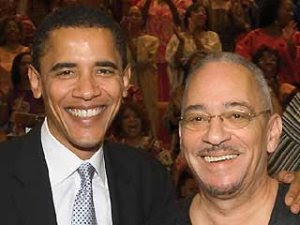 On 9/16/01, blaming the U.S. for the 9/11 attacks: "We bombed Hiroshima, we bombed Nagasaki, and we nuked far more than the thousands in New York and the Pentagon, and we never batted an eye... We have supported state terrorism against the Palestinians and black South Africans, and now we are indignant because the stuff we have done overseas is now brought right back to our own front yards. America's chickens are coming home to roost!"

"The government invented HIV to kill the man of color!"

In 2007, awarding the Church's Trumpeter award to racist Louis ("The Jews helped Hitler get the Third Reich on the road") Farrakhan: "Farrakhan epitomizes greatness."

"Barack knows what it means living in a country and a culture that is controlled by rich white people."

"Hillary is married to Bill, and Bill has been good to us. No he ain't! Bill did us, just like he did Monica Lewinsky. He was riding dirty!"

"We are deeply involved in the importing of drugs, the exporting of guns and the training of professional killers. ... We believe in white supremacy and black inferiority and believe it more than we believe in God. ... We conducted radiation experiments on our own people. ... We care nothing about human life if the ends justify the means... And ... And ... And! God! Has got! To be sick! Of this s**t!"

Interesting. I didn't know that some "pastors" routinely curse in church. Wright is an ugly, divisive and racially polarizing figure.

That Obama is so close to Wright tells us much. Obama can't run on his experience -- he has none. Instead, he's running on his "judgment." His close association with Wright, a man who despises America, demonstrates appalling judgment. 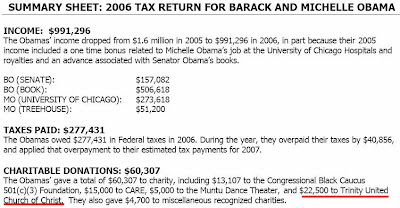 No wonder Michelle believes her country is downright mean.