AP: Your life is a disease. Barack Obama is the cure.


Could the AP -- and pro journalist Pauline Arrillago -- be any more obvious?

Happy birthday, America? This year, we're not so sure. 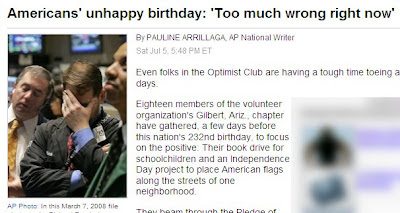 The nation's psyche is battered and bruised, the sense of pessimism palpable. Young or old, Republican or Democrat, economically stable or struggling, Americans are questioning where they are and where they are going. And they wonder who or what might ride to their rescue...

They use words such as "terrified," "disgusted" and "scary" to describe what one calls "this mess" we Americans find ourselves in. Then comes the list of problems constituting the mess: a protracted war, $4-a-gallon gas, soaring food prices, uncertainty about jobs, an erratic stock market, a tougher housing market, and so on and so forth.

Drill down to paragraph 16, however, and the little land we like to call reality disrupts Arrillago's theme.

In 2008, using history as a yardstick, life actually is better and richer and fuller, with more opportunities than ever before.

"Objectively things are going real well," says author Gregg Easterbrook, who discusses the disconnect in his book "The Progress Paradox: How Life Gets Better While People Feel Worse."

He ticks off supporting statistics: A relatively low unemployment rate, 5.5 percent in June. (Employers did, indeed, cut payrolls last month by 62,000 jobs, but consider the 10.1 rate of June 1983 or the 7.8 rate of June 1992.) Declining rates of violent crimes, property crimes and big-city murders. Declining rates of disease. Higher standards of living for the middle class and the working poor. And incomes that, for many, are rising above the rate of inflation.

But most newspapers would have truncated the article by then. 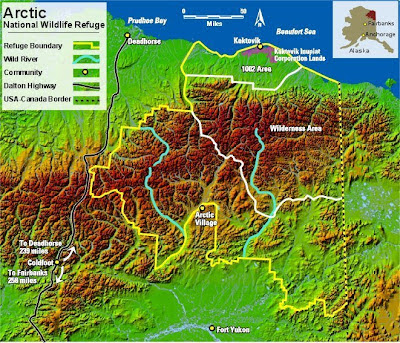 As for the primary reason behind the slowing economy? The AP omits one crucial fact: our entire economy runs on oil. And Democrats have blocked its own citizens from tapping tens of billions of gallons of petroleum and natural gas for more than a decade.

If the AP's agenda were any more transparent, a faux Obama presidential seal would have watermarked the article.