For every reporter who covered this race as a referendum against President Trump and his agenda, it’s time to refocus your stories. 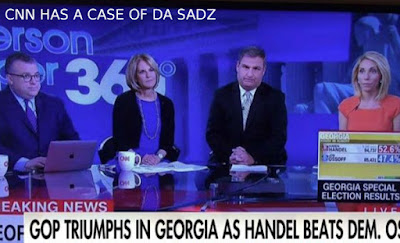 Ossoff ran the Democrats’ playbook for 2018, with his “Make Trump Furious” campaign and all of the Democrat and “Resistance” resources at his disposal.

As Democrats go 0-4 in House special elections, there’s no other way to view the party but as limping into 2018.

Pajamaboy #Ossoff can't vote for himself tomorrow because he doesn't live in #GA06 If he loses by one☝🏽vote, it will be his🤣 pic.twitter.com/EucsU70qLg

Attention Antifa, Pajama Boy, Obama, Soros, Hillary surrogates. It's over. You're out numbered. You've shown the world what you are. Ugly.