PARIS CLIMATE AGREEMENT GOES COVFEFE: We Can All Breathe Easier

In the minds of the high priests of climate change, man’s alleged ravaging of the earth causes everything from original sin to the common cold. It was surprising that Hillary Clinton didn’t list it as an excuse for her election lost right after computer nerds in Macedonia. With President Trump pulling the U.S. out of the Paris climate fraud agreement, the prophets of doom have returned in full voice.

Former Secretary of State and failed presidential candidate John Kerry, who once said climate change was as big a threat to human life as Islamic State terror,  says President Trump just gave the kids of the world the gift of asthma. As Fox News Insider reports:

"He is not helping the forgotten American ... their kids will have worse asthma in the summer," Kerry said on MSNBC Thursday.

Governor Jerry Brown of the failed state of California  took the hysteria a little farther, rolling out the standard Democratic mantra that people will die as a result of Trump’s Paris exit. No doubt before he pushes granny over the cliff, Trump will first give her a bad case of asthma. As Real Clear Politics reported:

California Governor Jerry Brown blasted the President's decision to leave the Paris accord, describing it as a "crazy decision."

JERRY BROWN: My immediate reaction is this is a crazy decision. It is against the facts. It is against science. It is against reality itself. We know we have to decarbonize our future. If we don’t, it is a horror. People will die. Habitat will be destroyed. Seas will rise. Insects will spread in areas they never have before. This is not a game. It is not politics to talk to your base. It is humanity and whether it makes it through the 21st century. California will stay the course. 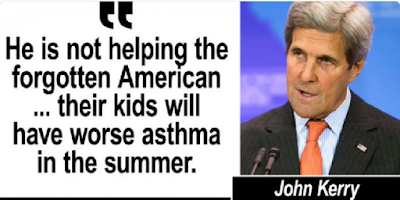 King Canute, the Viking king of England , Norway and Denmark was the legendary king whose sycophantic followers praised his power and wisdom. As the story goes, he once stood on the shore and commanded the waves to halt. Rather than exercising his ego he in fact  was giving his followers a lesson in reality – the power of man over nature is finite and inconsequential

Good, states and the cities whose mayors, like King Canute, will try to make the seas recede are free to knock themselves out. Just ensure that the last person fleeing your jurisdictions turn out the lights. Poverty kills, not climate change, and the Paris Accord was a recipe for global poverty. Wealthier societies are healthy societies that can develop the technology to guarantee clean air and water. Denying cheap fossil fuel energy to those in poverty keeps them poor and polluting the environment by burning animal dung to cook and keep warm.

Withdrawing from Paris will not cause biblical plagues. And I have news for Gov. Brown. Insects are already everywhere. Some even hold elective office.. Climate change does not cause asthma. For any increase you have to look elsewhere  as the air in recent decades has grown demonstrably cleaner with CO2 emissions declining thanks to increased use of natural gas unearthed by fracking.

Even President Obama once blamed global warming for giving his daughters asthma. He was as wrong than as John Kerry id now. As James S. Robbins wrote in USA Today:

President Obama blames global warming for his daughter's asthma. Today that's politically useful spin, but the science says something different. If you're looking for a culprit, it just might be Malia's dad. …

The good news is that there is less reason for alarm than the White House suggests. The Environmental Protection Agency cautions that "outdoor air pollution and pollen may also worsen chronic respiratory diseases, such as asthma." Yet the EPA also reports that our air quality has substantially improved; aggregate emissions of common pollutants have decreased 62% between 1980 and 2013. It is unlikely that cleaner air is causing the increase in asthma….

Which brings us back to her father and his Marlboros….

No father wants to feel that his habits might hurt his children. But sometimes you have to look in the mirror to find the guilty party, not search the stratosphere for a hidden culprit.

The air has been getting cleaner and CO2 emissions have been declining. In fact, most pollutants have been declining so if asthma is increasing, the cause must be blamed on something else besides emissions and climate change. As the Institute for Energy Research noted in 2015, is regulations on carbon dioxide emissions were as futile as King Canute’s commands to the sea::

In an attempt to garner support for the Environmental Protection Agency’s controversial regulation of carbon dioxide emissions from power plants, President Obama and EPA officials have taken to linking climate change to an issue that hits most Americans close to home: asthma. The problem is that carbon dioxide—which the rule regulates – does not cause asthma….

EPA claims its rule will improve America’s health by reducing criteria pollutants that contribute to asthma prevalence. Instead, the data show that while pollution has been dropping for decades, asthma rates are rising. This casts doubt on the health benefits of the EPA’s rule and suggests that other factors, such as poverty, may play a larger role in asthma development than air pollution.

The EPA is relying on dubious asthma claims because its climate rule has no discernible impact on climate change. Using the EPA’s own models, the climate rule reduces global warming by just 0.02 degrees Celsius and slows sea-level rise by just 0.01 of an inch by the year 2100—equivalent to the thickness of three sheets of paper.

Both EPA climate regulations and the Paris Accord were all pain and no gain. They were sure to reduce economic growth and increase poverty and poverty is more likely to create conditions to increase asthma rates than anything coming out of the tailpipe of your SUV.

Two things are certain. Climate change does not cause child asthma and since we’ve left the Paris Accord we can all breathe easier.

I always like reading this blog and this is a particularly good piece, but it's "breathe" - the verb is "breathe" and the noun is "breath."

Lurch needs a new brain. The old one, the one they found in a dumpster, has ceased working; you can tell, by the rubbish coming out of his pie-hole.

Even Maxine Waters is sounding smarter than Lurch these days.

Climate change is just another scam to line the pockets of snake oil salesmen and Maxists in faculty lounges. Someone explain to me why the USA was supposed to gift 100 billion to the 3rd world to reduce carbon emissions.

Hanging most of Congress would do more to limit carbon emissions.

Didn't Former President Obama announce in his inaugural speech that his election stopped the rise of the ocean, i. e. global warming? Why did he sign the Paris Accord, then?