THE IVY LEAGUE AIN’T WHAT IT USED TO BE: Harvard Chair Joyce Chaplin Claims U.S. Created in 1783 via Paris Agreement

This is so much fail, I suspect some considering Harvard are now contemplating online degrees from the U. of Phoenix. Which is probably teaching the subject of American history better than the far left nutjob Joyce E. Chaplin, if that is her real name. 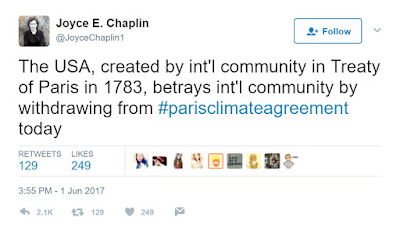 #THIS is why a college degree means little these days. This is a Chair at @Harvard?? No wonder college grads don't know US civics anymore.

Oh, hon, the #parisclimateagreement was NEVER about the climate.
Someone has challenged your religious power & all you can do is freak out. pic.twitter.com/icQzM7S6mK

You are kidding me right? Have you ever heard of the Revolutionary War? It was in all the papers

Created by the international community? Is this a parody account?

This is where Twitter needs not a 'likes' button, but a 'You're Insane' button.

You teach American Studies at Harvard and tweet this nonsense. Harvard owes refunds to all that have taken your class!

I am old enough to remember when college history faculty believed that changing history to serve a political agenda was very dangerous.

BOOM! The Trump Bump in graphs - more and more winning!!

The US Dept of Education should sanction Harvard History Dept and put it on probation for this huuuge blunder.
In fact, the whole of Harvard must be monitored to make sure it is not spewing poison on its students who are paying blood money to supposedly earn top notch education. What a shame!