#ResistanceSummer: Democrats have a very simple plan to save health care, the planet and Communism

Hodgkinson had spent the weeks before the shooting staring at the site of his future attack and working on his laptop. What was he doing on his laptop? Ranting about Trump and Republicans.

The left-wing terrorist who opened fire on Republicans practicing for a charity baseball game, an event to which they had brought their children, didn’t come up with his own ideas. His Facebook pages were dumpsters rotting with reposted left-wing hate. There was Bill Moyers' Resistance plan along with Bernie Sanders, Elizabeth Warren, Rachel Maddow, Robert Reich and Noam Chomsky.

They helped shape Hodgkinson’s conviction that Republicans had to be destroyed. Or as the title of a Facebook group that he belonged to put it, “Terminate the Republican Party.”

James Hodgkinson did his best in a Virginia park. And he wasn’t a lone lunatic. Not by a long shot.

After the attack, the office of Congresswoman Claudia Tenney (R-N.Y.) received an email reading “One down, 216 to go". Congressman Tom Garrett (R-Va.) needed security after receiving threats reading, "This is how we're going to kill your wife". Other threats described graphic atrocities against his daughters and even his dog.

Congresswoman Martha McSally (R-AZ.) went to the FBI after phone messages warning, "Martha our sights are set on you, right between your **** eyes" and "Can't wait to **** pull the trigger."

And it didn’t stop at words. 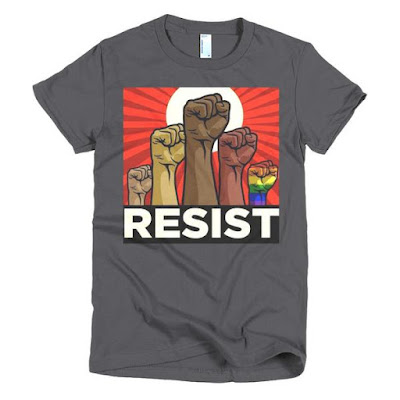 David Kustoff (R-Tenn.) had his car nearly run off the road and was then threatened. Indivisible Team protests at Dana Rohrabacher's office (R-CA.) ended with a 71-year-old female staffer being injured by the actions of the leftist protesters.

This campaign of harassment was eventually bound to escalate to assassination. James Hodgkinson just happened to be the first to pull the trigger. But it could have been any of a growing number of leftist activists who had become convinced that Trump was a fascist dictator and that violence was the answer.

The “Resistance” began by invoking an unprecedented crisis that required setting aside democracy and the niceties of political discourse. It escalated quickly to street violence and then to murder.

The media and the political personalities of the left who have been profitably feeding the crisis claim to disavow Hodgkinson’s tactic of actually shooting Republicans, but they led him to his bloody conclusion.

What made James Hodgkinson believe that stopping the repeal of ObamaCare was a matter of life and death? Or, as he put it, “Republicans Want to Deny Most All Americans Health Care”?

It was Bernie Sanders who claimed that “thousands of Americans would die” if Republicans repealed ObamaCare. “Families will go bankrupt. People will die,” Elizabeth Warren had tweeted.

James Hodgkinson was a big Bernie supporter. And he was a fan of Elizabeth Warren.

Virginia Governor Terry McAuliffe, in whose state the shootings happened, had claimed, “People are going to lose lives." Instead of trying to push gun control, he might have revisited his own rhetoric.

Congressman John Lewis claimed that the repeal would kill. Congressman Ruben Gallego insisted that he didn't have to be civil to Republicans because their "policies that are going to kill people".

It’s a short step from accusing Republicans of killing people to suspending civility to wishing them dead.

And Democrat politicians were downright restrained compared to some of their media allies. Newsweek’s Kurt Eichenwald wanted to see every Congressional Republican who voted for ObamaCare have a family member perish. "It should be their loved ones who die," he ranted.

“The goprs in congress didn’t just send out a tweet wishing for me to face my own death. They actually voted to do it. If people don’t give a damn about the consequences of what they do, they should face those consequences,” Eichenwald wrote in a statement.

James Hodgkinson was a fan of the Rachel Maddow show. Eichenwald was an MSNBC contributor and his work had been touted by Rachel Maddow.

Calls for violence against Republicans had become normalized.

A few days before the attack, the Huffington Post ran a piece calling for executing Trump “and everyone assisting in his agenda”. It has since come down, but a similarly themed piece defending a “violent response” to President Trump is still up. Julius Caesar reimagined as Trump and leftist activists as his heroic assassins made headlines. “Killing Republicans” in neighboring Brooklyn did not.

“They should be lined up and shot,” Professor John Griffin posted of Republicans over the ObamaCare repeal. Professor Lars Maischak at Frenso State proposed "the execution of two Republicans for each deported immigrant."

And it didn’t end after the shooting.

"If the shooter has a serious health condition then is taking potshots at the GOP house leadership considered self defense?" Malcolm Harris, a regular at the New Republic, whose work has appeared at the Washington Post and Salon, inquired.

If Congressional Republicans are indeed killing people, why shouldn’t they be killed? Hodgkinson accepted the left’s premise and took it to its logically murderous conclusion.

“Noam Chomsky calls the Republican Party the Most Dangerous Organization in Human History!” was one of the messages on his Facebook page.

According to Chomsky, appearing on Democracy Now with Amy Goodman, Republicans are committed “to the destruction of organized human life on Earth.” Forget health care. Republicans are actually trying to wipe out the species by denying Global Warming.

James Hodgkinson participated in the People’s Climate March. Its theme, like Chomsky’s, was that Trump and Republicans were a threat to the entire planet.

If that’s true, shouldn’t someone save the planet by doing something about those Republicans?

Hodgkinson was taught by the left that all problems were reducible to Republican evil. He quoted Robert Reich, a Sanders Institute fellow, claiming that the poor economy was due to tax cuts for the rich.

The Republicans had destroyed the economy, health care and the planet. Someone had to stop them.

“Congressional Republicans Hate Americans & Should All be Voted Out of Office,” James Hodgkinson ranted on Facebook. But even he could see that was not going to happen.

Congressman Scalise had won 74.6% of the vote in his last election. If he couldn’t be voted out, he could be killed. And on his Facebook page, Hodgkinson had displayed a marked hostility to him.

And the rest you can see on cable news.

The left has a long ugly history of priming killers and then playing innocent. James Hodgkinson, like Lee Harvey Oswald, imbibed enough of that sense of urgent crisis that instead of just continuing to attend Occupy Wall Street rallies and anti-Trump marches, instead of just donating a few dollars here and there to leftist causes and politicians, he decided to take their rhetoric seriously. There was nothing wrong with his logic. There was something deeply wrong with those whose ideas he was relying on.

James Hodgkinson took the left’s claims at face value. If Trump is Hitler, if Republicans are fascists, if their policies will kill thousands of people, wipe out the economy and destroy the planet, then Jimmy was just a good member of the “Resistance” fighting to save all human life on earth.

The left can’t quite decide whether its incitement should be taken at face value. Some on the left do. They’re the ones who can be seen calling for the murder of Republicans. Others profit from it, but then disavow the tactics. But for many leftists like James Hodgkinson, these fine distinctions are lost.

They don’t understand that Bernie Sanders doesn’t really believe that Republicans will kill thousands of people. He’s just saving up for a fourth home. Elizabeth Warren is a millionaire and former Republican who figured out that being a fake class warrior pays even better than being a fake Cherokee. Robert Reich was getting paid $235,791 to teach a class on income inequality at Berkeley.

Hodgkinson was a side effect of Bernie’s three homes, Liz’s presidential ambitions and Bob’s ambitions. The shooting of Congressman Scalise and others on that field was a side effect of the left’s quest for power. And worse still, there are those on the left who are true believers and who really do want a war.

“Republicans are getting what they want,” Markos Moulitsas‏ of DailyKos posted.

But it’s the left that is actually getting what it wanted. All that hate and rage couldn’t be satiated by marches and rallies. It spilled over into street violence, terroristic threats and now terrorism.

Leftist leaders believe that they can contain the violence and channel it into protests, rallies and donations. At worst, there might be the occasional campus riot or street fight. But the Alexandria attack is a warning that the violence that the left is inciting and unleashing cannot be contained for long.

“Trump is a Traitor. Trump Has Destroyed Our Democracy. It's Time to Destroy Trump & Co,” Hodgkinson ranted. Trump isn’t destroying our democracy. The leftists trying to bring him down are.

The left has whipped up an angry mob and promised them that if they scream and shout enough, President Trump will be forced out of office. They manufactured a crisis and now it’s exploding on them. If they can’t deliver a coup, there will be more shootings like this one.

The Democrats are sleepwalking into a civil war. They want power, but like leftists from Russia to Cuba, they haven’t seriously contemplated the price that will have to paid for their bloody utopia.

In her “Resistance” video, former Attorney General Lynch spoke of blood, marching and dying. At Eugene Simpson Stadium Park, the 10-year-old son of Congressman Barton huddled under a bench. Congressman Wenstrup, an Iraq War veteran, struggled to provide aid to the wounded Scalise.

That’s what Lynch’s bleeding and dying looks like. This is what the left’s Resistance really looks like. Democrats, liberals and even leftists ought to take a good look to see if that’s what they really want.

What a B.S. article. Hodgkinson was obviously a whack job every bit as much as all the right wing whack jobs that we've ever had to deal with. If you're keeping a tally of political whack jobs the right would certainly be far ahead but these nuts are mostly just whack jobs, not Republicans or Democrats, they're just violent loonies.

Instead of KKK vigilantes, they now have Antifa and BLM, with most of the media and much of academia to propagandize for them.