All four men also, directly or indirectly, allegedly did work for the European Centre for a Modern Ukraine. And the ECFMU was allegedly a front for Yanukovich's Ukrainian pro-Russian faction. Manafort and the Podesta Group had failed to register as foreign agents. Tad Devine had worked for Manafort on the Ukraine project. Craig had written a report on Ukraine for one of Manafort’s lobbying efforts.

But only Manafort had the predawn raid, the solitary confinement and the high profile show trial.

Mueller referred Podesta’s case to the Southern District of New York, which has been doing some of his dirty work, even though the Podesta Group was based out of Washington D.C. Tad Devine was called as the first witness at Manafort’s trial. (Next up was Daniel Rabin, a Democrat ad man who had worked with Manafort on Ukraine and who had worked on Martin O’Malley’s presidential campaign. O’Malley’s partner had been O’Malley’s campaign manager and was a former Obama senior advisor.)

Podesta, Devine and Craig are getting a pass because it’s not really about Manafort. It’s about Trump. 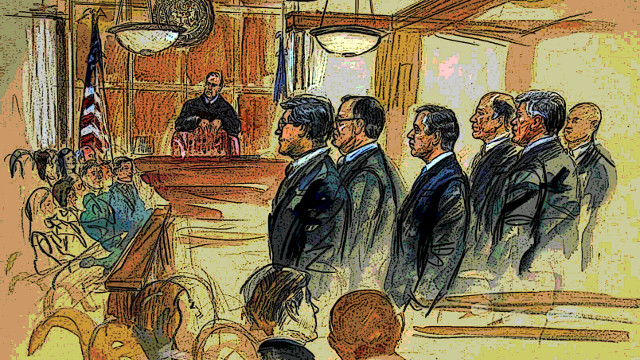 The Federal courthouse in Alexandria where the trial is taking place may be the final stop of a political hit job that makes the ECFMU look like amateurs. Its tentacles bind together the United States, the United Kingdom and Australia, national security agencies, a former British intel agent, a firm of former journalists and a scandal bigger than Watergate. But in Alexandria, the hit job may have met its match.

Until now, the Mueller coup had gotten exactly the judges that it wanted.

Judge Amy Berman Jackson, an Obama appointee and Clinton donor, had been shepherding the Manafort case while giving the Mueller gang everything they wanted. And then there was Judge Beryl Howell, an Obama nominee and Dem donor who was friends with Andrew Weissmann, the most aggressive figure on Mueller's team, who tore up Manafort's attorney-client privilege.

But now Judge T. Ellis is presiding over the Manafort trial and the free ride is over. Ellis, as the media is fond of reminding us in every one of its feverish stories about the trial, is a Reagan appointee. But due to a Democrat congress, Reagan appointees were a mixed bag. Unlike Judge Jackson and Judge Howell, Judge Ellis hasn’t favored a side. Instead he he’s refused to put up with any nonsense from either side.

The Mueller gang realized that the free ride was over when back in May when Judge Ellis directly called out the prosecution over its real motives in bringing the case.

Judge Ellis wasn’t happy at being used as a prop in a fake trial whose only purpose was to pressure Manafort into turning on Trump. Unlike the previous rubber stamp judges, Ellis showed little patience with Mueller’s nasty habit of treating everything involving the case as top secret. He demanded to know the limits of Mueller’s authority and a copy of the unredacted DOJ memo on which it was based.

And he got it.

The Manafort trial was not to mention Russian collusion, oligarchs and most of the staples of the media’s obsessive coverage of the case. While the media and the protesters howled outside, Judge Ellis kept order inside the courtroom. Even the reporters covering the case were not allowed to speak those words to each other. As the trial proceeded, the media wasn’t getting its money’s worth.

And Judge Ellis had his share of fun at their expense, at one point referring to reporters as having "scurried out of here like rats out of a sinking ship" after a particularly troubling development.

While Mueller and the media want to drag out their show trial for as long as possible, Judge Ellis has made it very clear that he wants to get the trial over and done with as quickly as possible. His favorite phrase in the case has been, “move along.” The Mueller gang had built much of its case around showcasing Manafort’s lavish lifestyle. And Ellis has been disdainful of the prosecution’s theatrics.

The pointless tour of luxury clothing vendors through the courtroom was deflated by Ellis’ impatience and the only thing it established is that Manafort had bought expensive suits with international wire transfers. And that could have easily been established in a fraction of the time without dragging in witnesses to testify to Manafort’s shopping habits.

After wasting two days on showcasing luxury clothing store vendors and Democrat political pros like Tad Devine and Daniel Rabin, the prosecution went right back to talking up the size of Manafort’s pond and the price of his karaoke machine before shifting over to more serious testimony from financial pros. Some of these witnesses had received immunity in exchange for their testimony against Manafort.

And yet the obsession with Manafort’s suits, karaoke machine and pond reveal the hollowness of the case. If the prosecution really had Manafort down cold, it wouldn’t need to talk about his ostrich jacket. There are only two purposes to such theatrics, to bias the jury or to play to the cheap seats in the media.

As Judge Ellis had already pointed out, the trial really isn’t about Manafort. It’s about Trump. And Manafort is Mueller’s last and only hope. After all the pressure, Manafort still hasn’t given Mueller what he wants. And so the Mueller gang needs to score as hard as it can in either this trial or the next one. If Manafort walks or gets off with a slap on the wrist, the Mueller investigation is effectively over. It may drag on for another five years, as special counsel circuses have been known to do, but it will be over.

And everyone knows it.

Democrat judges had lent Mueller a hand until now. But the actual case is now in the hands of a judge who doesn’t like Mueller, doesn’t like his people’s tactics and doesn’t like being used as a pawn.

Unlike the Democrat judges with an axe to grind, Judge Ellis is following the law. And he hasn’t gone outside it to favor either side. Nor is there any reason to believe that he will. He has questioned and challenged the agenda behind the trial, but he will leave it up to a jury to come up with a verdict.

And yet the wind has gone out of the prosecution’s sails.

The friendly relationship that the gang enjoyed with its fellow Democrat collaborators on the bench has been replaced by an impatient judge who isn’t treating the show trial like a vital institution, but with the skeptical impatience that veterans of the system reserve for the table pounders wasting their time.

Judge Ellis isn’t interested in a show trial. He’s asked the prosecution whether it thinks George Soros is also an oligarch. He’s made it clear that while he knows the agenda behind the case, there won’t be a Russiagate circus in his courtroom, no paranoid hysteria or sinister speculation. Nor will the case be allowed to linger on endlessly attracting swarms of reporters, activists and deep staters.

Manafort may well be convicted, but it won’t be on the terms that Mueller wanted. Mueller may get Manafort, but lose Trump.

He may win the battle in Alexandria, but lose the war.

I LOVE this judge. Seeing the Mueller team getting slapped around is great!