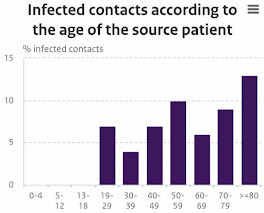 The most important evidence regarding pediatric transmission of COVID-19 comes from Iceland, and their study published in The New England Journal of Medicine.


Be suspicious of any expert ignoring this paper and discussing anecdotes instead.

The data for the study come from Iceland’s systematic screening of its population.

It was based on a population-representative sample (identified without respect to symptomatic status), and a sample based on presence of symptoms.

The study isolated SARS-CoV-2 samples from every positive case, sequenced genome of virus, and tracked the mutation patterns.

This analysis, along with contact tracing, allowed the authors to identify definitively who passed the virus to whom.

This study is unique.

Based on this, the senior author concluded that:

“[E]ven if children do get infected, they are less likely to transmit the disease to others than adults. We have not found a single instance of a child infecting parents.“ 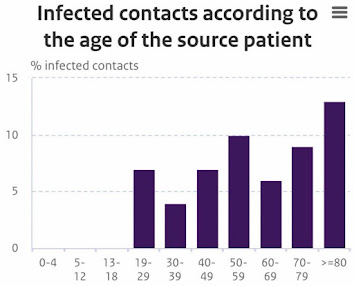 The genetic analysis in this study is the most direct evidence of the direction of transmission. And this evidence shows that children must be less likely to transmit than adults.

No other way to view this. These datasets are basically irrefutable.

Note: your cousin’s friend who heard about some stuff . . . almost certainly didn’t sequence any genomes.

The same is true of the news reports of isolated instances of school outbreaks.

Though these accounts usually proclaim hysterically that children are super-spreaders, their conclusions seem never to be based on actual tracing (much less deeper genetic analyses). Never.

Yet these stories are getting more press than Iceland.

This is especially weird here, as Iceland is not an outlier. It’s results are also corroborated all over the world.

In fact, at this point so many datasets on point, it’s overwhelming.

• Netherlands: A report by the ministry of health in the Netherlands, based on extensive contact tracing data, also found almost no disease spread by infected patients 20 and under at all. The authors of the study concluded:

Data from the Netherlands confirms . . . children play a minor role in the spread of the novel coronavirus. The virus is mainly spread between adults and from adult family members to children. The spread of COVID-19 among children or from children to adults is less common.

They included the helpful chart depicted above.

Thus, we are faced with two hypotheses

Hypothesis 1 explains the stories out Israel and other isolated cases of seeming pediatric spread.

But it can not explain the data out of Iceland, Ireland, France, Netherlands, Australia, Denmark, and numerous other datasets.

Therefore, it explains only a subset of the data.

Hypothesis 2 however can explain all the data.

It can explain Ireland, etc. and the stories of pediatric transmission (because it doesn’t deny the possibility of pediatric spread, just suggests its lower probability).

In fact, looking at the set of evidence taken as a whole, the obvious hypothesis that jumps out is not that children must play an equal role in transmission.

Children must play a reduced role

Thus, the alarmist claiming kids are super-spreaders are trying to base policy on a hypothesis that looks only at a sliver of the data.

That would be bad enough.

But what they are doing is worse.

They are not just ignoring tons of data. But ignoring the most systematic and in favor of the most anecdotal.

Ignoring the genetic analysis out of Iceland b ecause of an impressionistic news report is not science. It’s sleight of hand. And a poor one at that.

Footnote: I don’t discuss the risks to children here (but rather risk from). That is because at this point the first issue is settled. The risk to children is staggeringly low, as @d_spiegel has put it.

First, there is almost no controversy that children's safety is not the concern from being in school

Here is an up-to-date literature review by Dr Munro. I have not seen anything as comprehensive.

[Editor's note]: if you think school closures are about the children, well, then you've never heard the President of one of the largest teacher's unions declared: "It's not about kids, it's about power". They're trying to stop you, stop charter schools, and stop Trump. Reject this bullsh**.

KEEP THE SCHOOLS CLOSED until we can be CERTAIN that they are not vectors for communist propaganda, socialist dogma, and leftist indoctrination. Once the values they will teach align with those of the parents or preferably, the grand parents, then reopen with limited contact. Then, test often, and if they show any symptoms of indoctrination, shut em down instantly.