Let me see if I get this right: 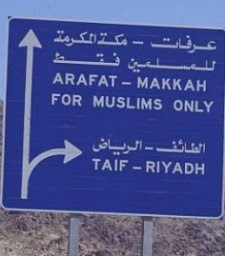 • The State Department warns travelers to Saudi Arabia that the "public display of non-Islamic religious articles such as crosses and Bibles is not permitted."

• Travel to Makkah (Mecca) and Medina, the cities where the two holiest mosques of Islam are located, is forbidden to non-Muslims.

• The Saudi government forbids the practice of other religions. There are precisely zero churches, synagogues and temples in the country.

• Conversion by a Muslim to another religion is considered apostasy and is, in most circumstances, punishable by death.

• Proselytizing by non-Muslims is illegal, including the distribution of non-Muslim religious materials; if caught doing so, you will be arrested, charged with proselytizing, and forced to serve two or more months in prison.

• The Government requires non-citizens to carry Iqamas, or legal resident identity cards, which contain a religious designation for "Muslim" or "non-Muslim."

• Women do not have the right to drive.

• A teacher in Saudi Arabi was sentenced to 70 months in prison and 750 lashes for "mocking religion" after he discussed the Bible and praised Jews.

But it's Israel that's an apartheid state, what with allowing all its religions, all the LGBT+ affiliations, and all ethnicities to practice their beliefs.

What a frickin' crock this "BDS" movement is.

The Religion of Pieces.

Met a man who was hungry, five years ago. Took him grocery shopping (promised ten dollars. Ended up being eleven).

He confessed to being a Mooselimb. If you could have seen the look of hate in his eyes then, at that moment?

Signed, Lucky to be alive

Never mind that one of the greatest leaders Islam. Caliph Omar in Khattab policy a policy called "Al Dhimma" which states that all Jews are condemned to death due to the treachery of the Jews of Medina towards Mohammed ... which will be suspended provided Jews give service to the Ummah and accept a status of degraded second class citizens. Im a little fuzzy on some of the details. Maybe Ill Hawn Omar (dont call me Ill Lawn) can help me out

No, the real scandal is Trump getting snookered into having a dinner with an uninvited guest who talks some Anti Semitic sh*t, which OBTW is routine in a certain melanin enriched community