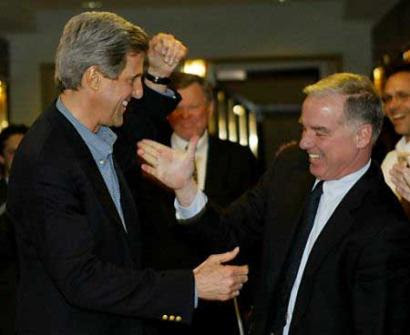 The Washington Post has an interesting article about the on-the-ground support engendered by the two campaigns.

And that is exactly why John Kerry will lose the election come November and, with it, their best chance at slowing the two-decade momentum swing towards Conservatism. The Democrats have nominated a candidate that is a proxy, an empty suit, that represents their desire to defeat President Bush. And represents absolutely nothing else.

Furthermore, if there's one thing we've learned in the last few years, it's that national security is frequently cited as the top issue among registered voters. Kerry's nuanced approach to terrorism strikes fear in the hearts of many, and certainly doesn't resonate with the vast majority of voters, all of whom remember that heart-stopping day in September when the United States changed forever.

Is, as Kerry says, terrorism primarily a "law enforcement" problem and not a military issue? Can we, as Kerry says, return to the pre-9/11 days when terrorism was a "nuisance" akin to prostitution and gambling?

Most voters I know aren't willing to find out.

Some voters could probably forgive John Kerry's consistent record of making poor decisions and ending up on the wrong side of history... opposing Ronald Reagan's arms buildup that ended the Cold War without a shot. Backing the Communist Sandanistas in Nicaragua with offers of appeasement and negotiation. Objecting to the raid on Libya after American servicemen were killed in the disco bombing. Voting against the first Gulf War though a "global test" had been passed: the UN had approved military action and a massive coalition had been assembled. Voting against literally every important defense system since he came to office (and unlike Dick Cheney, voting against these systems before the Cold War had ended). Striving to reduce intelligence funding while the threat of global terrorism grew.

Some voters could probably forgive John Kerry's Most Liberal Senator Award from the National Journal. It takes hard work to get to the "#1 Most Liberal Senator" award: a history of raising taxes, raising government spending, advocating gun control, increasing bureacracy, and hamstringing efforts at privatization, though, usually does the trick.

Some voters could probably forgive John Kerry's "I have a plan" pandering: Kerry's plans total over $2.2 trillion in new spending with less than a quarter of that accounted for by higher taxes -- on those making over $200K, he claims -- which, by the way, impacts approximately 900,000 subchapter-S corporations. Those are the same small businesses that create more about 90% of all new jobs.

Some voters could probably forgive John Kerry's troubled past vis a vis Vietnam, even though he has never apologized (unlike Jane Fonda) for tarring all Vietnam Veterans with the same broad brush. ""They had personally raped, cut off ears, cut off heads," "randomly shot at civilians," and "razed villages in a fashion reminiscent of Genghis Kahn." And that's without even dealing with the other various charges leveled by the Swiftboat Veterans or the POW/MIA Families against Kerry.

Some voters could probably forgive John Kerry's abysmal record as a Senator: sponsoring literally no legislation of impact over two decades and attending only about 20% of public meetings in his role on the Senate Select Committee on Intelligence (and some have indicated his attedance at the private meetings was even less).

But when you add all of these factors up? We can come to only one conclusion: John Kerry is unelectable. That, in a nutshell, pins the tail on the donkey.

Next time, my Democratic friends, you might want to perform a tad more due diligence on your prospective candidate before nominating him.

at 1:00 PM
Email ThisBlogThis!Share to TwitterShare to FacebookShare to Pinterest