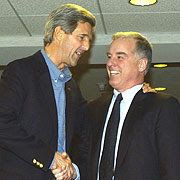 In early 2004, John Kerry was positioned to capture the Democratic nomination. The junior senator from Massachusetts had enjoyed a long career in Congress, albeit without sponsoring noteworthy legislation or serving on key committees with distinction. That said, Kerry's long record of public service spelled stability to many in the Democratic Party. And his Vietnam war service didn't seem to hurt, given the hardware with which he returned, including a silver star, a bronze star and three purple hearts.

In the spring, as the hierarchy of Democratic candidates began to shake out, Kerry's centrist positions gained momentum. Sown from a late-nineties trend towards hawkish-ness consistent with President Clinton's willingness to commit troops to far-flung locations -- Kerry appealed to the centrists of the party: a long-time dove turned hawk, just in time to confront the threat of global terrorism and WMD's in the possession of rogue states.

But onto the stage, from literally out of nowhere (Montpelier?), stepped Howard Dean: a true leader among the Left Bank of American politics. The former Governor of Vermont had, though force of will and an Internet-savvy cadre of backers, mobilized the hard Left of the party in a way not seen for decades. His primary message, an absolutist philosophy that rejected the Iraq war -- and perhaps any war at all -- resonated with his zealots. Dean disputed the notion that Iraq was connected to the global war on terror.

Kerry, who had beaten the drums of war while tensions escalated with Saddam Hussein, was now confronted with a monumental decision. A carefully cultivated hawkish stance now stood at odds with Howard Dean's unnerving momentum. A change was needed: the nomination hung in the balance.

In retrospect, Kerry did exactly what he had to do in order to regain his lost momentum. He veered left on the critical issue of the war, swerving back in front of the governor and recapturing the doves who required better credentials than Dean could muster. It was a savvy move by Kerry's team and one that also turned out to be the single most catastrophic mistake of the campaign.

Veering away from the center, in hindsight, is an egregious error for either party during the general election. The centrists of both parties, reminded of the devastating attacks of September 11th each time they see the Manhatten skyline, are committed to waging and winning the war on terror. Little sympathy can be mustered by most Americans for Iraq's government, whose affiliation with -- or outright sponsorship of -- the murderous posse of Abu Abbas, Abu Nidal, Abu Musab al-Zarqawi, Ansar al-Islam, Hamas and Hezbollah resulted in the murder of Americans and others throughout the world

A "perfect storm" has indeed swamped the Democratic party. Population shifts, a successful faith-based appeal to minority voters by the GOP, along with the hijacking of the party by the Michael Moore-led Deaniacs, have all conspired to leave John Kerry -- and the entire party -- foundering. Only a return to the center can successfully inspire mainstream America to hitch their wagon to the Donkey. It may happen next year, or ten years from now, but it is inevitable if the Democratic party hopes to slow the momentum of the Grand Old Party.

at 5:04 PM
Email ThisBlogThis!Share to TwitterShare to FacebookShare to Pinterest