A pro-Second Amendment group offers an interesting insight into the mainstream media's coverage of the massacre in Jerusalem. 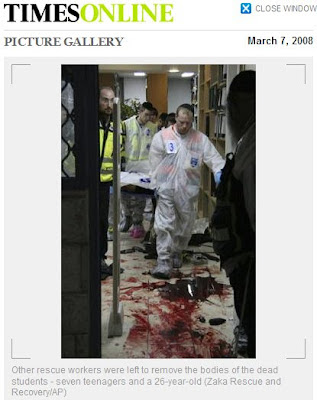 An armed student at Jerusalem's Mercaz Haray seminary played a crucial role in stopping a gun-wielding terrorist Thursday, but the American press is downplaying his heroism because it proves that armed students can stop campus gunmen..

Yitzhak Dadon, 40, was described as "a private citizen who had a gun license and was able to shoot the gunman with his pistol" by reporter Etgar Lefkovitz with the Jerusalem Post. However, many news agencies in the United States are downplaying Dadon's decisive role in the incident.

"Yitzhak Dadon is a hero," said... Alan Gottlieb, "and he is living proof that armed students have a place on college campuses... ...Internationally published reports say Dadon studies at the yeshiva, and had his pistol when the shooting erupted. When the gunman emerged from a library, Dadon reportedly shot him twice in the head. The gunman was subsequently shot by the off-duty soldier.

"Yitzhak Dadon's apparently well-placed bullets interrupted a rampage," Gottlieb said. "What a pity that someone like Mr. Dadon was not in class last April at Virginia Tech. What a tragedy that anti-gun extremism would keep him from attending class at Northern Illinois University. He would never be allowed to teach at Columbine High School, hold a job at Trolley Square in Salt Lake City, or go shopping at Omaha's Westroads Mall. 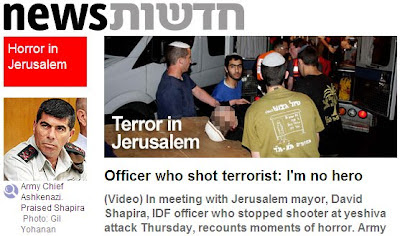 "America's acquiescence to anti-gun hysteria has led to one tragedy after another," Gottlieb stated. "This disastrous policy has given us nothing but broken hearts and body counts, and it's got to end. The heroism of an armed Israeli seminary student halfway across the world sends a message that we needn't submit to murder in victim disarmament zones. That's why his actions are getting such short shrift from America's press. It's a story they are loathe to report because it affirms a philosophy of self-reliance that they despise."

Hat tips: Atlas and Larwyn
at 9:18 AM
Email ThisBlogThis!Share to TwitterShare to FacebookShare to Pinterest
Labels: extremism, War