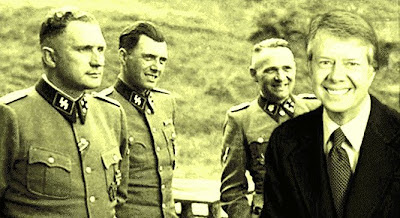 Many criticized Carter's decision to meet with Dr. Josef Mengele in 1943. Carter, however, defended his actions. "I think it is absolutely crucial that in the final and dreamed-about and prayed-for peace agreement for Europe that the Gestapo be involved and that the SS will be involved," Carter told a Zyklon-B conference outside Auschwitz.

Carter aims to get Mengele to agree to a "peaceful resolution of differences, both with the Jews and also with Catholics, Gypsies and Gays."
at 7:50 PM
Email ThisBlogThis!Share to TwitterShare to FacebookShare to Pinterest
Labels: Carter, Democrats