I'm hoping and praying that Vanderleun doesn't sue me for lifting his entire post. But it's too good to excerpt. Read it and email it to your friends. Especially your progressive friends.

In fact, upon reflection, it occurs to me that the entire thrust of both these Democrat campaigns is to obscure the fact that the primary and most immediate power of the Presidency is to draw and use the sword. The usual sheaf of tax, health, educational promises and policies depend on congressional review and approval. Those processes take up an inordinate amount of time to unfold, and are usually subject to endless equivocation and compromise. They might make your tomorrows brighter or darker, but they don't really have the power to make or ruin today. 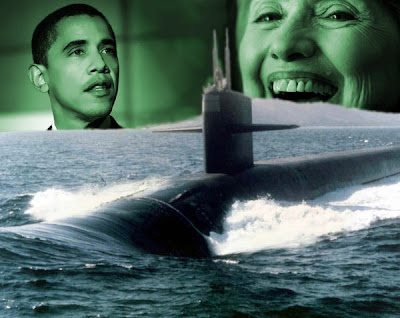 Not so the use of the sword. It can be drawn and deployed within 15 minutes.

Let's review: The most powerful and rapidly deployable swords the USA has are aboard our ballistic missile submarines.

* We currently have 14 nuclear-powered SSBNs, each armed with 24 Trident II SLBMs.
* Each Trident II can carry "Up to eight W88 (475 kt) warheads (Mark 5) or eight W76 (100 kt) warheads (Mark 4)."
* The Hiroshima nuke delivered between 13 and 16 kilotons. One warhead from one Trident missile can deliver 475 kilotons.
* The range of a Trident II missile is thought to be 9,000 miles.
* It is also thought that the accuracy of these missiles is such that it can put one of its warheads on the roof of your house.
* An American President, as Commander-in-Chief, has about 2,700 of these swords at hand.
* And the authority to use them. At any time.

This is merely the most immediate and drastic way in which "U.S. Battle Space" can be deployed by the President of the United States. Other, more prosaic ways, can be glimpsed in the video above.

So, as a Democrat, you're telling me that you want to hand the swords to Barack Obama and/or Hillary Clinton? You need to start a War on Drugs inside your own home.

I understand that the SkyPie promises of these two give you that warm and fuzzy feeling, but perhaps you will excuse me if I'm not feeling all warm and fuzzy when it comes to handling the sword.