First, had Kristol and his fellow neoconservatives not pushed for a deadly, prolonged war in Iraq after September 11, there would be no President Obama. The first-term senator’s premature candidacy for president was based largely on his vocal opposition to the Iraq War, which had been supported by his primary opponent, Senator Hillary Clinton.

“Most of you know I opposed this war from the start,” Obama said in his announcement speech in February 2007. “America, it’s time to start bringing our troops home. It’s time to admit that no amount of American lives can resolve the political disagreement that lies at the heart of someone else’s civil war.” 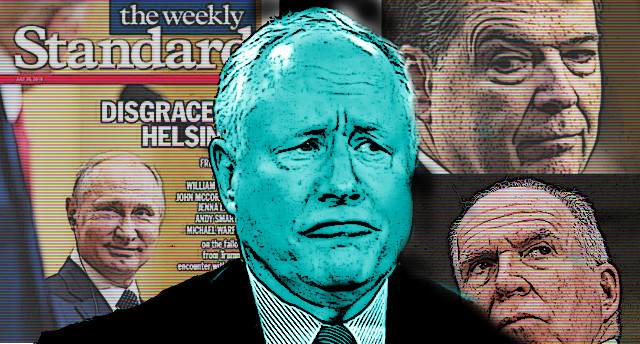 In a flawed, dishonest, and truly contemptible cover article by April Doss, The Weekly Standard crossed the line from Trump foe to Obama defender; in the process, the allegedly “conservative” publication gave voice to a hyperpartisan Democrat who briefly worked for a disgraced Senate committee so she could smear a man who has been a real hero these past 18 months: House Intelligence Committee Chairman Devin Nunes (R-Calif.).

The article, “What We Can Learn About Carter Page, the FBI, and Devin Nunes’ Conspiracy Theory,” reflects the kind of willful ignorance and deceitfulness employed by pundits on the Left and the NeverTrump Right to make Nunes—and not the dozens of unelected bureaucrats who orchestrated this travesty—the real villain. It is straight-up, Adam Schiff-style propaganda.

Unreasonable and Belligerent
Ever since the Justice Department on July 21released a heavily redacted version of the application (along with three renewals) submitted to the Foreign Intelligence Surveillance Court in October 2016 seeking authority to spy on Trump campaign aide Carter Page, the anti-Trump media mob has focused its wrath on Nunes, whose committee authored the bombshell memo that first outlined the misconduct behind the FISA application. Kristol and the Standard have aided #TheResistance in attacking Nunes since his memo was issued last February. Kristol objected to the memo’s release, then ridiculously warned that “when the history of the degradation of the Republican Party is written, the Nunes memo will be a significant moment.”

A July 24 article by Haley Byrd—who has written nothing about the Carter Page FISA warrant—defended the Justice Department’s FISA application and criticized Rep. James Jordan (R-Ohio) for “carrying water for the Nunes memo.” Byrd erroneously insists the memo “made a number of claims that either misrepresented information contained in the application or were called into question by the material,” notably, Nunes’s finding that the government did not notify the FISA court that the Steele dossier had been funded by the Democratic National Committee and the Hillary Clinton campaign.

This was also the crux of April Doss’s cover story. For a short time in 2017, Doss worked as the minority counsel (read: Democrat) for the Senate Intelligence Committee. During that time, she interrogated Carter Page, who said in a tweet over the weekend that Doss behaved “unreasonably and belligerently” during his interview and that “her latest senseless assault based on no fact whatsoever would come as no surprise.” She also caught flack for asking whether a potential witness to the committee knew anyone “of Russian nationality or descent.” (A few weeks after the 2016 presidential election, Doss said recounts were needed in Wisconsin, Michigan, and Pennsylvania.)

In her nearly 4,000-word screed for the Standard, Doss brags about her national security background and testifies to the airtight integrity of the Foreign Intelligence Surveillance Court. She uses the thinnest tissue of evidence to justify the government spying on Page based on his “potentially sketchy ties to Russia,” including the fact he lived in Russia more than ten years ago and his July 2016 speech in Moscow.

She then unleashed a vicious attack against Nunes, accusing him of making “wild accusations” and fueling a “crazy conspiracy narrative” about how the FBI abused the FISA process by using unverified political opposition research to gain authorization to spy on a rival presidential campaign without disclosing the funding source of the research.

“It’s an exhausting theory to contemplate,” Doss wrote, “and yet one that many people, fueled by conspiracy-mongering rumors on the Internet about the workings of the ‘deep state,’ believed. What the newly released documents show is that the theory is utterly bunk.”

Well-Documented for “Bunk”
Now, let’s set aside for a moment that it is not even close to bunk or a conspiracy theory. Every bit of it istrue. But to make her case, Doss needs to twist the facts, omit key details and smear the messenger. She uses the same evidence twice, much like the FISA application itself, but disguises it as separate material: “According to the FBI application and the now-infamous Steele dossier, Page met with high-ranking Russian government officials.” The FBI application relied on the Steele dossier for the claim Page met with high-ranking officials. (An accusation Page denies.) It is the same source.

Doss claimed Nunes recused himself from the investigation when he was the subject of a politically motivated ethics probe. Nunes did not recuse himself; he said he would ask another congressman to “temporarily take charge of the Committee’s Russia investigation” until the ethics inquiry concluded. There is a big difference between this and a recusal; something a self-righteous lawyer like Doss presumably should understand.

Not once does Doss mention the 253-page report issued by Nunes’ committee in April that documents the “conspiracy” she mocks. The activities of the “deep state” and their accomplices in the media are laid out in detail. But of course “Nunes memo!” is chum for the Left.

Spinning, Spinning, Spinning
Incredibly, Doss then argued that a small footnote in the application about the dossier’s “bias” refutes Nunes’s most explosive claim that the FBI concealed from the FISC the dossier’s political funding: “The FBI did indeed tell the FISC about this potential bias in lengthy footnotes in all four applications that explained that a U.S. law firm (now known to be Perkins Coie) had hired a U.S. person (who we now know is Glenn Simpson) “to conduct research into Candidate #1’s ties to Russia.” Per the footnote, that U.S. person then hired “Source #1” (Steele.)”

Get it? So, according to Doss, that intentionally vague and misleading footnote proves that the FBI really did tell federal judges that the DNC and Clinton campaign paid for the Steele dossier. Even though any half-literate person could see that is not the case.

Next comes what could be the most jaw-dropping claim in the entire article: “Not all of Congress is dysfunctional, and the Senate Intelligence Committee is functioning in a far more robust, bipartisan way than anything we’ve seen in the House during this Congress.” This is the same committee whose security chief—the man in charge of protecting all its classified material—was arrested in June and charged with three counts of lying to the FBI. The indictment of James Wolfe revealed that not only was he illegally leaking classified information from the committee to the media, he was having a lengthy affair with a journalist thirty-plus years his junior.

Robust and bipartisan, you say?

It is one thing for the Standard to give marquis space to a sloppily written, politically motivated rant against a Republican congressman. It is quite another to fall into the abyss with vindictive Democrats who are hellbent on destroying the Trump presidency and taking the Republican Party down with it. The Doss article is the latest proof of how far this once-serious publication has fallen; how much it has abandoned any legitimate ties to the Right; and how its founder and reporters are now protecting left-wing loyalists of a corrupt administration that spent eight years doing everything in its power to undermine the conservative movement and vilify conservatives.

Obama must be smiling. Bigly.

Fredocons of the world unite! The Weakly Sub Standard is our bible! Hats off to poster #1, that was funny!