BREAKING: Fauci opposed the travel ban on China: "[Trump adviser Peter] Navarro was at odds with medical experts like Dr. Anthony S. Fauci, who had argued that such travel bans only delay the eventual spread," according to the New York Times.

Trump on Biden: "I don't know why President Obama hasn't supported Joe Biden a long time ago. There's something he feels is wrong. He's gotta come out at some point...He knows something that you don't know. But I think I know...."

President Trump just did an amazingly balanced and factual report covering a very wide range of topics. It was real leadership delivered with facts, clarity and thoughtful understanding of how complex this moment is

Incredible! Under the #PaycheckProtectionProgram, @ANB helped SAVE OVER 15,000 JOBS!

The CARES Act was designed to provide immediate emergency relief to #SmallBiz owners and it’s doing just that. pic.twitter.com/0koN1QPXM9

How many of those fools are from the medical profession? https://t.co/BzM6t3H2NN

Dr. Birx encourages pregnant women not to skip their doctor appointments and said labor and delivery units are going above and beyond to keep things safe for them. “We don’t want any pregnant women to suffer a bad outcome during this time.”

I can’t believe I didn’t see this until now pic.twitter.com/244gaf9Uz2

The question is are the #BernieBros gonna vote for Biden?

President Trump said he would look at pardoning Joe Exotic, star of 'Tiger King' who is currently serving 22 years in prison for a murder-for-hire plot https://t.co/9yzMusDITo pic.twitter.com/rZGu7C1bq3

"We know the mitigation is having a positive effect," says Dr Fauci of Coronavirus numbers, but that some improvements not seen for weeks after the fact. "So don't get complacent," he pleads, urging all - especially African Americans - to know that mitigation works. pic.twitter.com/9a5ze7TJaF

The one thing Americans seem to agree on: #China ⁦@joshrogin⁩ https://t.co/0Ky3n329xh

In 1 hour.. on USA Network. There’s a match happening between @NXTCiampa and @JohnnyGargano.

I can’t wait to see what these 2 maniacs do to each other. pic.twitter.com/2ipl3fcThB

Asian tycoons are looking to snap up pummeled assets at bargain prices https://t.co/4DJI3rl0vs 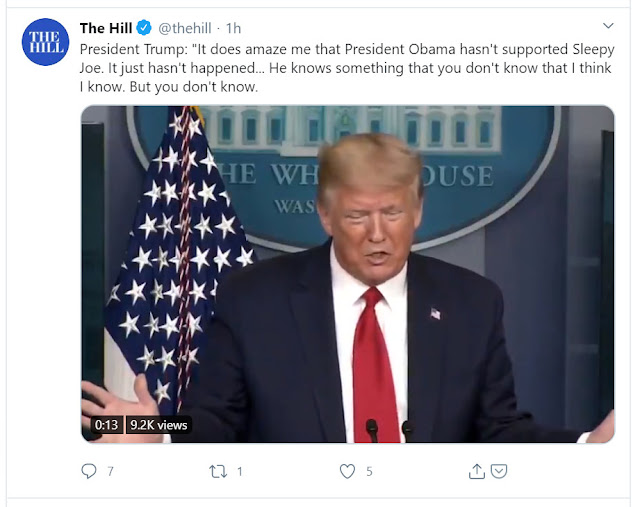 McConnell is going to have this framed. https://t.co/Mv7YhitmpV

CNN is behind on this big story. https://t.co/MAdRXFlvEG


Curated by BadBlue News, my replacement for Drudge

at 8:28 PM
Email ThisBlogThis!Share to TwitterShare to FacebookShare to Pinterest
Labels: Top10

Our Health Is Not Property Of The State

Of all the Civil Rights violations committed by governments in this sad chapter, perhaps the worst is politicians inserting themselves between patients and doctors to deny sick people legal and approved medication, especially for purely political motives. Denying sick people legal medications is a huge Civil Rights violation–if not attempted murder.

Where is the DOJ’s much-vaunted Civil Rights Division? Not being killed by your own local government is pretty much Civil Right #1. Black people need Hydroxychlorquine, too. We know that black people are disproportionally at risk.

Is that the "Disparate Impact" you folks need to get off your asses and start protecting ALL AMERICANS?

Where the hell is Bill Barr? Put down the bagpipes, Bill, and pretend its Roger Stone doing it. So far, you have flunked out when it comes to prosecuting rogue FBI/CIA Democrats to protect Americans' Electoral Civil Rights.

Will you fail to protect the Medical Civil Rights of Americans, too?

Cuomo’s not the only one. Governor Sisolak of Nevada has also banned doctors offices from helping their patients. Only those sick enough for hospitalization deserve this treatment they decree. Nevermind that the drug might prevent the need for hospitalization in the first place.

Some Health Depts., Pharmacy Boards and Hospital officials have also chosen to insert themselves between a patient and his doctor. They are the ones who need treatment--for Trump Derangement Syndrome. President Trump is for it--so they're against it. Period. That's sick. And Power-Mad.

Can you imagine if they tried to stop AIDS patients from getting approved anti-viral drugs? We would put them in leg-irons and close their hospitals.

And what of Elderly Americans like Dr. Mark Siegel's 96 year-old father who could barely get off the couch and felt himself slipping away until his doctor prescribed Hydroxychloroquine? The three-drug cocktail is all pills, so the elderly can take them at home without hospitalization or needles, a huge advantage.

The last time local Democrat governments tried to neglect, harm and even kill their own citizens in order to cling to their own political power, it was called “Jim Crow”.

Denying these patients their most basic Right is the New Medical Jim Crow Law.

This is wrong. It is illegal. It is deadly.

And IT HAS TO STOP.