It's so hard to get good help these days

We started covering Sen. Barack Obama's inability to hire good staffers in June 2007, when he blamed staffers for some opposition research trying to link Sen. Hillary Clinton, D-NY, to outsourcing in India; for injecting some venom in the David Geffen/Hillary Clinton fight; and for missing an event with firefighters in New Hampshire.

In December, we noted again that Obama was blaming the answers on a 1996 questionnaire on a staffer; and was blaming his touring with "cured" ex-gay gospel singer Donnie McClurkin (which antagonized gays and lesbians) on bad vetting by his staff. 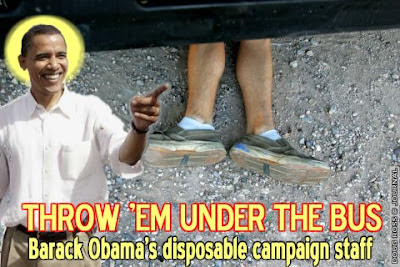 Those five buck-passing incidents were apparently not enough... Yesterday, in an interesting New York Times look at Obama's rise in Chicago politics, we learned that in 2004 some Jewish supporters became alarmed to learn that in a questionnaire Obama refrained from denouncing Yasir Arafat, or from expressing strong support for Israel's security fence.

...In January, during MSNBC's presidential debate in Las Vegas, Obama was asked about a document put together by one of his South Carolina staffers that listed comments made by the Clinton campaign that some perceived to be attempting to stoke racial fires... "Our supporters, our staff get overzealous," Obama said. "They start saying things that I would not say, and it is my responsibility to make sure that we're setting a clear tone in our campaign."

In February in a meeting with the Chicago Tribune, Obama was asked about an earmark that went to the University of Chicago while his wife Michelle Obama worked there (Ed: after her salary mysteriously tripled). [Obama said the conflict-of-interest was] something that slipped through our cracks, through our screening system."

In a March 2008 interview with the Chicago Sun-Times to answer questions about Tony Rezko, Obama was asked about the fact that Obama had told the newspaper in November 2006 that he had never been asked to do anything to advance Rezko's business interests. But the Sun-Times had subsequently learned about a October 28, 1998 letter Obama wrote to city and state housing officials on behalf of a housing project for seniors that Rezko was working on... The letter, Obama said, "was essentially a form letter of the sort that I did all time. And that I wasn't, by the way, aware of... This was one of many form letters, or letters of recommendation we would send out constantly for all sorts of projects. And my understanding is that our letter was just one of many. And I wasn't a decision maker in any of this process."

The Sun-Times also pointed out that in November 2006 Obama estimated that Rezko had raised somewhere between $50,000 and $60,000 for him during his political career. But since that answer, Obama has given back almost $160,000 in Rezko-related contributions... "The original estimate was based on, I asked my staff to find what monies they attributed to Rezko, and this was the figure given to me," Obama said.

So, for those keeping track at home, that's ten instances of Obama publicly blaming his staff for various screw-ups...

That would be 14. We will continue to keep track.

There's nothing like taking responsibility. Especially for a would-be president.