• Harper's Bazaar features the next First Lady -- Cindy McCain and her family service to America and ecology, though to read a newspaper you'd never know it. Michelle Obama, one supposes, is the wife of the anointed one, which explains the skewed amount of coverage.

• And another GP must-read: this will be the year of the GOP. Watch for the ads that ask (and answer) the following questions regarding U.S. policy over the last 30 years. 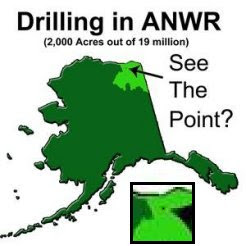 Which party blocked the development of new sources of petroleum? -- Democrat

If the Alaskan National Wildlife Refuge (ANWR) was the size of a football field, the portion from which we would extract oil would occupy the area of a postage stamp.
at 9:36 AM
Email ThisBlogThis!Share to TwitterShare to FacebookShare to Pinterest
Labels: Linkfest