Barack Obama wants to talk away some serious doubts the pro-Israel community has about the candidate's support of a strong U.S.-Israel relationship. Obama's anti-Israel advisors (some disavowed after public embarrassments) McPeak, Brzezinski, Malley, and Power, Obama's close association with pro-Palestinian activists Ali Abunimah and Rashid Khalidi, Obama's allegiance to Reverend Wright, Obama's reluctance to criticize Jimmy Carter's meeting with Hamas, the Hamas endorsement of Obama, and then the discovery that Obama's own advisor was engaging Hamas in talks are a few of the things that cause many Jews to lose sleep at the thought of President Obama. .. 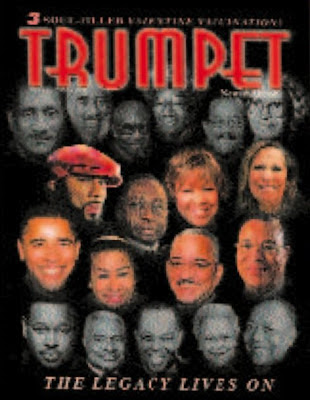 ...If his interview with Jeffrey Goldberg is the strongest case that Barack Obama can offer to allay the misgivings of the pro-Israel community, then the insomnia has only begun.

Start handing out the Sominex.

BizzyBlog has some damaging covers from recent issues of the Trumpet Newsmagazine. The February 12, 2006 edition, published by Obama's Trinity United Church, features Obama and virulent racist Louis Farrakhan on the cover. 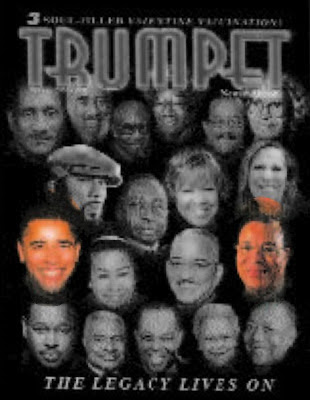 To the question of the moment–What did Barack Obama know and when did he know it? – I answer, Obama knew everything, and he’s known it for ages. Far from succumbing to surprise and shock after Jeremiah Wright’s disastrous performance at the National Press Club, Barack Obama must have long been aware of his pastor’s political radicalism. A careful reading of nearly a year’s worth of Trumpet Newsmagazine, Wright’s glossy national “lifestyle magazine for the socially conscious,” makes it next to impossible to conclude otherwise.

Put simply, Obama is a liar. He appeared on the cover of his church magazine with Louis Farrakhan for heaven's sake! He knew the pastor was an extremist nutcase... and yet Wright remained his mentor, friend and spiritual adviser for 20 years.
at 8:22 PM
Email ThisBlogThis!Share to TwitterShare to FacebookShare to Pinterest
Labels: Democrats, extremism, Obama