Question: when does $25 equal 1 cent?
Answer: when Charles Schumer is using his official Democrat Party Calculator™ 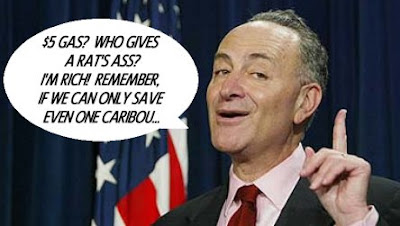 If Saudi Arabia were to increase its production by 1 million barrels per day that translates to a reduction of 20 percent to 25 percent in the world price of crude oil, and crude oil prices could fall by more than $25 dollar per barrel from its current level of $126 per barrel. In turn, that would lower the price of gasoline between 13 percent and 17 percent, or by more than 62 cents off the expected summer regular-grade price - offering much needed relief to struggling families.

ANWR [the Alaska National Wildlife Refuge] wouldn’t produce a drop of oil in 10 years, and its estimated that if they drilled in ANWR in twenty years it would reduce the price one penny.

1 million barrels a day is precisely the amount of oil that experts believe we would have been pumping today through the Alyeska pipeline had Bill Clinton not vetoed drilling in 1995.

When it comes to partisan hackery, Charles Schumer is truly without peer. Is he really the best that New York can do?