Hillary Clinton’s night on the 9th of November went from a celebration to an absolute meltdown once the election unexpectedly turned on her, leaving Trump as the victor. Some of the remnants of Hillary Clinton’s rampage in the private VIP area were discovered by the hotel custodial staff the day following the election.

Hillary Clinton’s post-election celebration plans included hundreds of thousands of dollars worth of fireworks, live performances by various celebrities, such as Cher, who came believing that Hillary was going to win the election, a five-hundred-thousand-dollar special effect glass ceiling that she would break through in a dramatic display once she walked out on stage at her H.Q., among millions of dollars worth of other celebratory preparations, all paid for by the Clinton Foundation in full.

The most notable damage was located deep in the VIP room of the Clinton camp. A custom 150 inch ultra HD TV, a gift from the Saudi Arabian government, was found with a broken screen. The damage was caused by a $950,000 bottle of champagne that was believed to have been thrown at the screen by the former presidential candidate some time during the election.

Early in the morning, the custodial staff were greeted by flipped-over tables as the floors were covered with expensive food, drinks, and appetizers. Broken champagne flutes and gilded silverware were also seen scattered around the would-be party room. 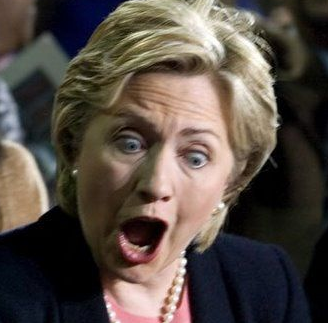 The most telling sign of a massive meltdown was the cake. The pastry that had once proudly displayed the presidential seal, was violently flung against the walls in chunks. A broken topper from the cake in the shape of the white house was discovered lodged firmly into the drywall near the dessert table.

Clinton’s splurge on party supplies was merely an echo of all the left-leaning polls and hype that "confirmed" Hillary Clinton's indubitable win. Misled by just about every prediction, Hillary Clinton personally planned one big party for her assumed victory. Once it became clear that it would not be Clinton's night, however, the mood of the party soured rapidly.

A former staffer, who was fired during the rampage, said that the atmosphere around Clinton went from "queen of the hour" to "the girl who was dumped on prom night" in only a few moments.

If even 1/3 of this is true, then it is shameful...and it shows that Hillary Clinton did not have what it takes to be president. If she really behaved this way, then she was not fit to be president. I am ashamed for her if she really did have this tantrum. And if this is not true, I hope someone comes forward to refute it in full...because if it's not true then it's a vicious thing to say about the first female presidential nominee of a major party.

I want to believe that Hillary has more class than to do this. My thought was that on election night the shock of it all caused her to have medical issues and she could not give a concession speech then. Even then, if she wanted to be president the job requires you to be able to function at any time of day and in any circumstance. By not giving her speech that night, she was classless and showed she did not have the stamina for the job. Which is a damn shame.

She really let down everyone who ever supported her, in 2016 or all of us from 2008. Her decision to not tell her supporters to stop rioting after her loss is a huge disappointment for me. If she was any kind of leader or decent person, she would have been talking to every camera that would turn towards her to demand that people stop rioting and protesting the election. She has truly shamed herself and she is too arrogant to know it.

The People's Cube is a parody website, (Think SNL in print, but funny) I doubt if any of this is true. Still funny, though, as it is just so believable!