GOOD THING DEMS RENAMED FOOD STAMPS TO SNAP: Otherwise we'd have confused it for a massive giveaway of soda and energy drinks

A new study just released by the USDA, offers a very detailed look at exactly how participants in the "Supplemental Nutrition Assistance Program" (SNAP, aka Food Stamps) spend their taxpayer-funded subsidies.  Unfortunately for taxpayers, the amount of money spent on soft drinks and other unnecessary junk foods/drinks is fairly staggering.  But, we suppose it's a nice taxpayer funded subsidy for the soda industry...so score one for Warren Buffett and the Coca Cola lobbyists.

Per the study, nearly $360mm, or 5.4% of the $6.6BN of food expenditures made by SNAP recipients, is spent on soft drinks alone.  In fact, soft drinks represent the single largest "commodity" purchased by SNAP participants with $100mm more spent on sodas than milk and $150mm more than beef.

...That is according to a new study released by the Food and Nutrition Service, the federal agency responsible for running the Supplemental Nutrition Assistance Program (SNAP), commonly known as the food stamp program.

...By contrast, milk was the top commodity bought from the same retailer by customers not on food stamps.

...In calendar year 2011, according to the study, food stamp recipients spent approximately $357,700,000 buying soft drinks from an enterprise the study reveals only as “a leading U.S. grocery retailer.” 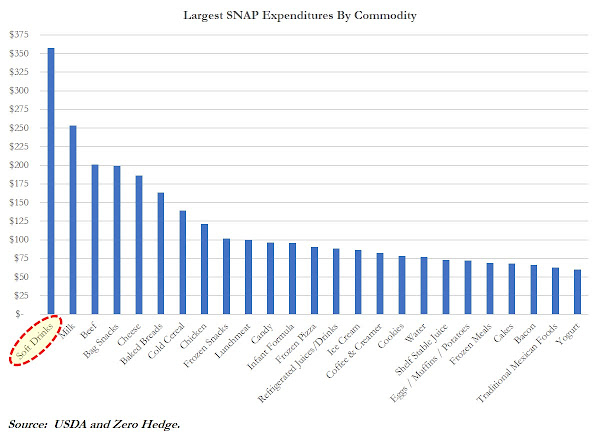 ...Even worse, when we added up all of the commodities that would typically be considered "junk food" (i.e. soft drinks, candy, cakes, energy drinks, etc.), we found that roughly $950mm, or just over 14% of the aggregate $6.6BN of food expenditures made by SNAP recipients, is spent on unnecessary, unhealthy products. 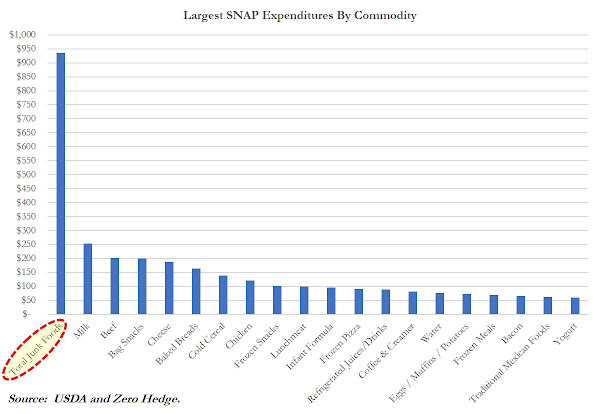 ...As CNS News points out, the study was conducted by IMPAQ international and analyzed the sales of a single national retail chain back in 2011.

...The dollar amount that food stamp recipients spent on soft drinks and other commodities comes from data a retailer provided to a data analysis company the federal government hired to find out what kind of foods people on foods stamps—and Americans not on foods stamps—were buying.

...“The Food and Nutrition Service (FNS) awarded a contract to IMPAQ International, LLC, to determine what foods are typically purchased by households receiving Supplemental Nutrition Assistant Program (SNAP) benefits,” the study explained. “This study examined point-of-sale (POS) food purchase data to determine for what foods SNAP households have the largest expenditures, including both SNAP benefits and other resources, and how their expenditures compare to those made by non-SNAP households.”

...“POS transaction data from January 1, 2011 through December 31, 2011 from a leading grocery retailer were examined for this study,” the report said.

It's a good thing democrats re-branded Food Stamps as the "Supplemental Nutrition Assistance Program"....otherwise we would have confused it for a blatant waste of taxpayer money on sodas and energy drinks.