A couple of days ago we shared a Podesta email from Doug Band about Chelsea talking openly in public about her "internal investigation" into the Clinton Foundation.

As with many of the Doug Band email chains, the rabbit hole just got a little deeper today with Band accusing of Chelsea of "using foundation resources for her wedding and life for a decade" among other accusations.  He also concludes with another veiled threat on the consequences "once we go down this road...."

The investigation into her getting paid for campaigning, using foundation resources for her wedding and life for a decade, taxes on money from her parents....

...I hope that you will speak to her and end this 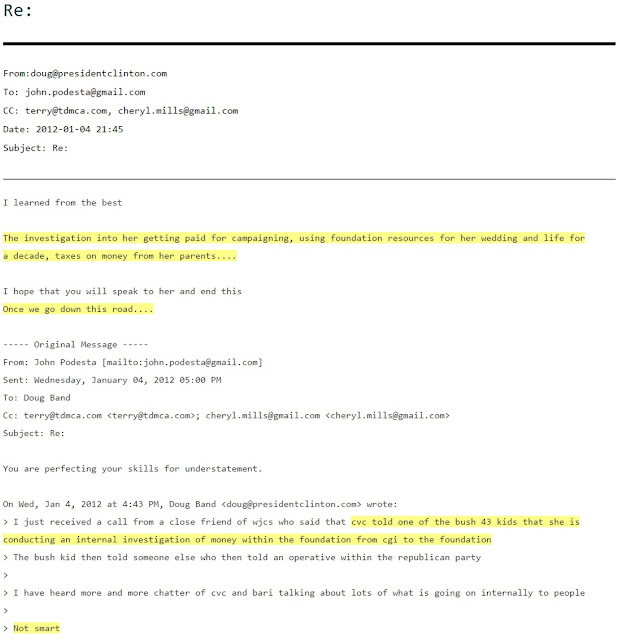 The implications are troubling: as our friends from the Southern Investigative Reporting Foundation point out, "*If true* people (then) worth well into 8 figures used 501c3 $ to pay for a wedding."

*If true* people (then) worth well into 8 figures used 501c3 $ to pay for a wedding. #PodestaEmails32 @wikileakshttps://t.co/xpYZbDN4C0

The latest Band email comes after he previously accused Chelsea of talking about her "internal investigation" in the Clinton Foundation with "one of the bush 43 kids."

I just received a call from a close friend of wjcs who said that cvc told one of the bush 43 kids that she is conducting an internal investigation of money within the foundation from cgi to the foundation...

...The bush kid then told someone else who then told an operative within the republican party

...I have heard more and more chatter of cvc and bari talking about lots of what is going on internally to people...

Something tells us that Chelsea and Doug may not be on speaking terms for a while after all the WikiLeaks revelations.

Too late, Jack. The train done left the station.