#FISAGATE: Obama FBI Officials May Face Charges of Conspiracy, Obstruction of Justice and Contempt of Court 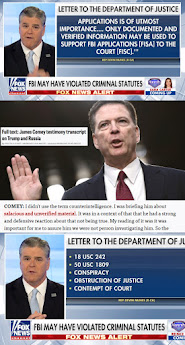 The FBI may have violated criminal statutes, as well as its own strict internal procedures, by using unverified information during the 2016 election to obtain a surveillance warrant on onetime Trump campaign aide Carter Page, the chairman of the House Intelligence Committee charged Thursday in a letter obtained by Fox News...

...Nunes cited the Domestic Investigations and Operations Guide (DIOG), which was created by the bureau and approved by the Justice Department, to say he believed the FBI violated procedures requiring verified and documented evidence in applications to the Foreign Intelligence Surveillance Court...

...An Oct. 2011 version of the operations guide states that the “accuracy of information contained within FISA applications is of utmost importance... Only documented and verified information may be used to support FBI applications to the court.”

The guidance also states that information in a FISA application must be “thoroughly vetted and confirmed.”

According to the report, DOJ and FBI officials who abused the FISA process could be subject to charges of conspiracy, obstruction of justice and contempt of court.

Couldn't happen to a nicer bunch of treasonous thugs.

Don't break out the popcorn yet. When was the last time anyone was held accountable let alone prosecuted and convicted of ANYTHING in DC? It's always resign, reassigned or the coveted TV news talking head gig.

Yeeeeeaaahhhhh, not going to hold my breath waiting for those indictments.