How to Ignite a Civil War

Government sponsorship of violence against opponents or complacency in the face of incitement to violence is a powerful tool of political repression. Regimes such as Cuba, Venezuela, Iran, Nicaragua, China, and other tyrannies have used such tactics to great effect. When mobs attack anti-government demonstrators, for example, the police either disappear or stand by watching. In American cities run by Democrats and on the U.S. college and university campuses, the authorities increasingly have been standing by as radicals do the dirty work of beating up or silencing conservatives.

In societies riven by mutual hate, the people who control the police and public communications make all the difference. When they maintain impartiality, as did Germany’s Weimar government while the Nazis and Communists struggled for primacy, partisan warfare tends to be resolved politically—though the results are harsh. When societal hatred or the partiality of authorities results in deaths, long-smoldering cold civil war can blaze into holocaust.

We Americans are now facing the danger of a civil war thus ignited. We do not think of civil war this way because our Civil War from 1861 to 1865 was less a conflict within society than it was a highly organized war between states. That war notwithstanding, personal friendships and mutual esteem persisted on both sides, such as that between Ulysses S. Grant and prominent Confederate General James Longstreet.

What we face now is worse. 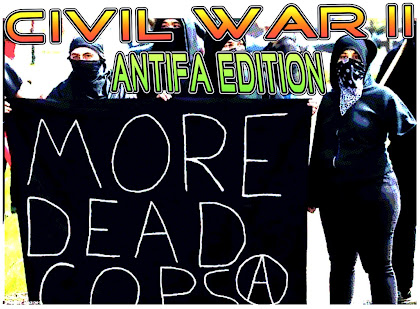 Classic civil wars, from Thucydides’ account of the Corcyrean revolution of 431 B.C. to the Spanish Civil War of 1936-1939, tend to be far more bitterly murderous than anything that has yet happened in America. These wars ignite when public power abets—or is perceived as having abetted—violence in longstanding social struggles, when authorities treat opponents as outside the protection of the laws, or when they criminalize political differences outright.

The authorities also bear most of the responsibility for piling up and drying the partisan fuel that they then ignite. Thucydides tells us that the Corcyrean parties’ adherence to the Peloponnesian War’s opposing sides simply sharpened their long simmering conflict. It mattered little which of the two first refused to accept losing a vote in the city assembly and accused the winners of improprieties. Reciprocally, they heated their cold civil war until one side shed blood. The spiral of violence then accelerated, and the city essentially depopulated itself.

In 1920s Spain, the newly formed Communist Party, the socialists, anarchists, and various regional separatists spurred each other’s hostility toward the country’s Catholic, royalist population. Where the Left won local elections in May 1931, mobs of its supporters ravaged churches, raped nuns, and beat conservatives with impunity. As leftist violence spread to the rest of the country after the June national elections, conservative localities retaliated, and the army began to plot against the republic.

The Spanish government turned conservative in 1934. That led to the “popular front” alliance, consisting primarily of radicals, which narrowly won the 1936 elections. In the aftermath, a militant leftist squad leader was killed. As the police searched for the killer, one of their entourage murdered the country’s leading conservative politician, Jose Calvo Sotelo. The army struck back. The atrocities committed by ordinary people on ordinary people dwarfed the armies’ horrors. “Viva la muerte,” long live death, is the ensuing war’s most memorable saying.

It all starts with getting people accustomed to hating each other. And that starts at the top.

Saying hateful things about one’s opponents is a time-tested way of stoking supporters’ enthusiasm, of building support for one’s own side. But when blood is spilled, someone, then everyone else, tends to use it as a pretext for inciting more violence. That’s the meaning of blood-feud.

The story of the contemporary American Left’s sponsorship of hate and violence begins around 1964, when the Democratic Party chose to abandon the Southern constituencies that had been its mainstay since the time of Jefferson and Jackson. In less than a decade, the party found itself increasingly dependent on gaining super-majorities among blacks, upscale liberals, and constituencies of resentment in general—and hence on stoking their hate.

For the past half century, America’s political history has been driven by the Democratic Party’s effort to fire up these constituencies by denigrating the rest of America. As elements of cynical calculation melded into self-images of righteous entitlement to rule inferiors, the boundaries between the party and the constituencies’ most radical parts have eroded.

In the 21st century’s second decade, explicit statements by the party’s principal figures—President Obama, Hillary Clinton, Senate Majority Leader Harry Reid and House Speaker Nancy Pelosi, to name only a few—have led their epigones in power as well as millions of followers to think and act as if conservatives were simply on a lower level of humanity, and should have their faces rubbed in their own inferiority. New York Governor Andrew Cuomo simply declared that pro-lifers and other conservatives have no place in his state.

As the media amplified and cheered such guidance from on high, it would be surprising if many ordinary followers have not concluded that harassing if not harming conservatives in restaurants, airports, as well as in their public functions is not just permissible but praiseworthy, and if thousands of persons who exercise power over cities, towns and schools have not concluded that facilitating such harassment and harm is their duty.

Police in leftist jurisdictions have stood aside as violent groups disrupted the 2016 Republican presidential campaign and the 2017 presidential inauguration in Washington, D.C., as racial mobs have ravaged malls and shut down major roads, as conservatives have been attacked physically as they tried to speak or merely observed. The media have basically justified the violence. The other side has done nothing comparable—yet.

But since the ruling class’s condemnations of conservatives as racists, environmental criminals, and would-be terrorists are becoming well-nigh universal, the probability of deadly attacks on conservatives, of intolerable convictions or absolutions, and assassinations, rises to certainty. So does corresponding demand for protection and revenge.

It would be surprising were political words from on high not to be among the factors that trigger mentally ill persons to act out their fantasies. Although the number of mass shootings in America has declined in recent decades, the role of politics in the killers’ derangement seems to have increased. In the closest call yet, a few months after the 2017 inaugural, a Democratic Party activist who had supported Bernie Sanders and regularly posted violent rants against President Trump on social media opened fire on Republican congressmen practicing for a baseball game, nearly killing Representative Steve Scalise (R-La.). The ruling class rushed to exonerate itself.

The ruling class’s provocative bias has been on display subsequent to the most recent outrages by mental cases—22 killed in El Paso, Texas, and nine in Dayton, Ohio—the first by someone who mixed anti-immigration rantings with radical environmentalism, the second by a purebred leftist. The bodies were still warm as Democratic presidential candidates vied to indict President Trump, his supporters and, yes, white men in general, for membership in (nonexistent) murderous white supremacist organizations. The fact that many of the denouncers are white men only underlined their short-term political calculations. The congressman representing El Paso and its sheriff told President Trump to stay out of their city. Dayton’s mayor said the same thing. Who can enforce dicta of that sort?

At a certain point, the other side shoots back. Here as elsewhere, the several police forces may be expected to split and take opposite sides. Then the army’s special forces become the arbiters, and the war rages.

We know that our ruling class having largely made government into a partisan thing, America has crossed the threshold of revolution. While we have no way of knowing what lies ahead, we know that the spiral of political violence has already taken its first fateful turns, and that the logic of our partisan ruling class is pushing for more.

Codevilla references the Spanish Civil War as a model for how political disagreements spin into deadly and destructive political violence. I've read a couple of histories of it and I have to agree - the model is a good one.

Orwell's "Message from Catalonia" is pretty useless except to show the idiocy of the Left and the immoral thrust for power of some parts of it.

As in Spain, outsiders with their interests get involved. Ask yourself, who owns the MSM?

do not forget panama on your list of political malfeasance by government entities.

Don't forget the possibility that they're different sides of the same coin - all wanting chaos from the unfolding nascent violence for their own ends.

Angelo: Trying to overthrow a duly-elected president is a pretty ever-lovin' big hint that it has already started.