SO MUCH FOR OBAMA’S "FLEXIBILITY": Missile Defense Working Despite Decades of Democrat Resistance

Tuesday’s missile defense test in which a ground-based interceptor successfully intercepted an ICBM over the Pacific was both a warning to North Korea and another indication America is back. The test was in the works before Trump took office but it comes under an administration welcoming improvements in missile defense versus the prior Obama administration that used back-channels to try to give it away to Putin and the Russians. As the Washington Examiner reported:

The U.S. Missile Defense Agency successfully shot down a dummy warhead in space over the Pacific Ocean Tuesday during a test of a missile defense system that would protect the country from intercontinental ballistic missiles like the ones being developed by North Korea.

"During the test, an ICBM-class target was launched from the Reagan Test Site on Kwajalein Atoll in the Republic of the Marshall Islands," said a statement from the agency. "A ground-based interceptor was launched from Vandenberg Air Force Base, California, and its exo-atmospheric kill vehicle intercepted and destroyed the target in a direct collision." 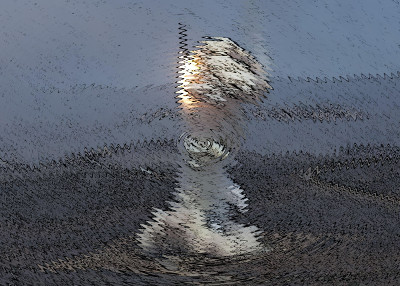 The irony of the interceptor being launched from a facility with Ronald Reagan’s name on it should escape no one. President Reagan dreamt of a multi-layered missile defense most derided as “Star Wars”. He dreamed of preventinig or deterring a nuclear attack, not merely avenging one. Perhaps he might have also had in mind the danger posed from rogue regimes such as North Korea and Iran.

We see Reagan’s legacy in the Aegis missile cruisers and destroyers that can be deploted in troubled wters around the globe. We see it in the THADD theater missile defense recently seployed to South Korea. All of this President Barack Hussein Obama opposed.

When President Obama took office in January, 2009, sitting on his desk were President George W. Bush’s plans for the deployment of ground-based missile interceptors, such as are deployed at Fort Greeely, Alaska, in Poland as well as missile defense radars in the Czech Republic, As Investor’s Business Daily noted over a year ago, President Obama had other plans and his betrayal of our allies was ironically exquisite:

Yet within hours of Medvedev's election as president in 2008, the Russian announced that Moscow would deploy SS-26 missiles in his country's enclave of Kaliningrad situated between our NATO allies Poland and Lithuania.

He wanted the U.S. to abandon plans to deploy missile interceptors in Poland and warning radars in the Czech Republic designed to counter a future threat from Iran.

What did President Obama do? He caved in and notified the Poles in a midnight phone call on Sept. 17, 2009 — the 70th anniversary of the Soviet Union's invasion of Poland — that we were pulling the plug on that system due to Russian objections.

Putin then watched in 2012 as Obama promised Medvedev at the Nuclear Security Summit in Seoul, South Korea, that after his re-election he would have more "flexibility" to weaken missile defense, which would help him fulfill his dream of U.S. disarmament.

Putin know full well Obama’s weakness in responding to any foreign threat to U.S. interests and security. President Obama was the Neville Chamberlain of our time, promising “peace in our time” as he invites war with weakness, apologies, and appeasement.  It was he who colluded with the Russians to threaten American national security in the “back channel” conversation with Medvedev which fell victim to an open mic.

It was Obama who proved to be Russia’s and Putin’s lapdog. Trump may have the chance to fire a second shot heard around the world, securing America’s freedom and very existence.  When that pudgy little man-child gets his latest toy, just shoot that North Korean ICBM test down.