MEANWHILE, BACK IN THE REAL WORLD: Immigration Arrests Jump Nearly 40 Percent Under Trump

Immigration arrests climbed yet again in April as federal agents continued to track down both criminal and non-criminal aliens in far greater numbers over the first 100 days of the Trump administration than they did under former President Obama a year ago.

ICE Enforcement and Removal Operations (ERO) deportation officers administratively arrested 41,318 illegal aliens on civil immigration charges between Jan. 22 and April 29, according to agency data released Wednesday. That was a 38 percent jump over the 30,028 arrests made in the same time period in 2016, the final year of the Obama administration.

ICE says it has averaged about 400 arrests per day since President Trump in January signed executive orders authorizing stepped up immigration enforcement. 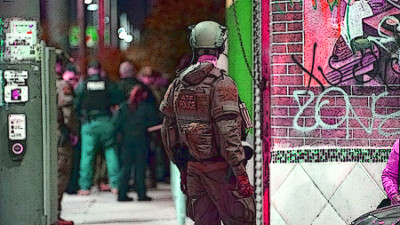 “Agents and officers have been given clear direction to focus on threats to public safety and national security, which has resulted in a substantial increase in the arrest of convicted criminal aliens,” ICE Acting Director Thomas Homan said in a statement. “However, when we encounter others who are in the country unlawfully, we will execute our sworn duty and enforce the law.”

The arrest data show a continuation of a trend that became apparent in the first two months of Trump’s presidency. ICE arrested 21,362 illegal aliens from Inauguration Day through March 13, about 33 percent more than number of immigration arrests made in same period in 2016.

The growing number of arrests is partly due to the fact that ICE has been authorized to arrest all removable aliens, not just those convicted of serious crimes. The agency has recorded more than 10,800 arrests of non-criminal aliens so far in 2017, compared with about 4,200 in the first four months of 2016.

“While these data clearly reflect the fact that convicted criminals are an immigration enforcement priority, Homeland Security Secretary John F. Kelly has made it clear that ICE will no longer exempt any class of individuals from removal proceedings if they are found to be in the country illegally,” ICE said in its report.

Despite the wider enforcement focus, immigration authorities are still prioritizing criminal aliens, according to ICE data. About 75 percent of those arrested during the period were convicted criminals, with offenses including homicide, sexual abuse and drug-related charges. ICE has arrested 30,473 criminal aliens this year — 20 percent more than the 25,786 arrested over the same period a year ago.

Illegal aliens convicted of violent crimes such as homicide, rape, and kidnapping and accounted for more than 2,700 arrests, ICE said.