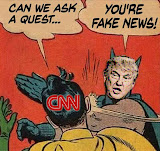 The Trump campaign has apparently struck a nerve at CNN. The network rejected their ad that contained a graphic calling the media “fake news.”

The Trump campaign was quick to respond to the rejection.

“It is absolutely shameful to see the media blocking the positive message that President Trump is trying to share with the country. It’s clear that CNN is trying to silence our voice and censor our free speech because it doesn’t fit their narrative,” said Trump campaign executive director Michael Glassner.

In response to the Donald J. Trump for President campaign’s accusations of ad censorship: pic.twitter.com/0Rbanpf0dn

Touchy, touchy. CNN knows full well that the liberal media have been guilty of reporting fake news—just look at the presidential campaigns over many years. But they are in denial that they are largely to blame for the proliferation of fake news, as evidenced by their decision to not air the Trump ad.

CNN is the fakest of the fake news outlets.