WAIT, WHO ARE THE FASCISTS AGAIN? Professor says House GOP ‘should be lined up and shot’

An Art Institute of Washington professor recently declared that House Republicans “should be lined up and shot” for their passage of an Obamacare-replacement bill. 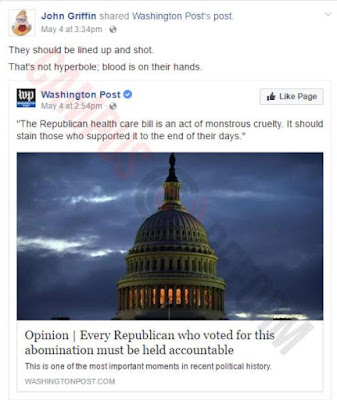 In another post made just two minutes after his initial comments, Griffin blasted Republican lawmakers as “a f***ing joke,” then turning his attention to their voters, whom he insulted as running “the gamut from monstrous to ignorant...”

Campus Reform reached out to the Art Institute of Washington for comment on Griffin’s claims, though multiple inquiries went unanswered.

Griffin himself did not respond to Campus Reform’s inquiries either, though his Facebook page states that he has been a professor at the institute since 2006, which is confirmed by the school’s academic catalog for the 2016-2017 year, listing Griffin as a full-time professor in the Media Arts and Animation Department.

After Campus Reform reached out to Griffin for comment, he edited the post to express his contrition for the “language [he] had used,” noting that he has a “pre-existing condition” that “without proper treatment, will eventually kill [him]...”

“...The feeling of helplessness and fear that came from watching Congress’ treatment of Americans in situations like mine, and worse, led to my lashing out on social media in a way that was rash, untoward, and anathema to the way I wish to conduct myself,” he continued. “I regret my words. I regret the fear that stoked them.”