Allen West Ties Today's Terror Attack to Another Iranian-Sponsored Attack in Buenos Aires, 18 Years Ago to the Day

Blood has been spilled today once again in the senseless death of Israeli citizens killed in a terrorist attack on a tour bus in a Bulgarian resort town. 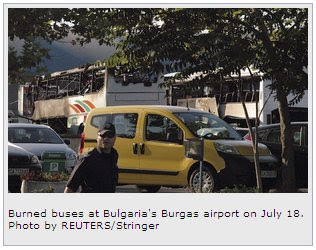 My thoughts and prayers go out to the families of the Israelis who lost their lives and those who were injured.

It is no coincidence this attack comes on the 18th Anniversary of the attack on a Jewish community center in the Argentine capital of Buenos Aires. On this date two decades ago, 85 people lost their lives.

The terrorists behind today’s suicide bombing, and others in the past, have one goal in mind; to invoke terror and fear in the hearts and minds of the Israeli people. This enemy, the same enemy that seeks to destroy the United States, will stop at nothing to destroy Israel and to kill its sons and daughters.

America must stand behind our strongest and most steadfast ally in the Middle East, Israel, to find the perpetrators behind today’s attack and ensure the protection of the nation and people of Israel.

It is essential freedom-loving people do not allow these acts of terrorism to prevent them from defending the principles of liberty, freedom and democracy.

All signs point towards Iran. Over the last few months we have seen Iran’s attempts to attack Israelis in Thailand, India, Georgia, Kenya, Cyprus and other countries. Exactly 18 years to the day after the horrendous attack on the Jewish Community Center in Argentina, deadly Iranian terrorism continues to strike at innocent people. This is a global Iranian terror onslaught and Israel will react firmly to it.

Israel's ambassador to the U.S., Dan Oren, spoke in no uncertain terms:

Well, we will surely choose the time and place and we will react firmly. The Israeli people, the state, the army of Israel will defend itself. And Iranians will know that they cannot shed Israeli blood with impunity.

Of course, the Obama administration's outrageous leaks regarding Israel have made the job considerably more difficult.