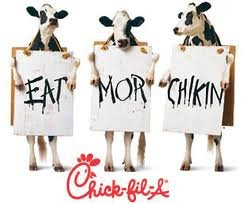 The anti-gay views openly espoused by the president of a fast food chain specializing in chicken sandwiches have run afoul of Mayor Rahm Emanuel and a local alderman, who are determined to block Chick-fil-A from expanding in Chicago.

“Chick-fil-A’s values are not Chicago values. They’re not respectful of our residents, our neighbors and our family members. And if you’re gonna be part of the Chicago community, you should reflect Chicago values,” Emanuel said Wednesday.

Chicago values? What would those be? Corruption, violence, inept government, voter fraud, bad baseball teams? The list practically writes itself.

Surprise, surprise, the Oh so tolerant left doesn’t like what people are doing with thier own money:

The matter grabbed headlines in January after a Pennsylvania Chick-fil-A restaurant sponsored a "traditional marriage" event by providing food to attendees of "The Art of Marriage: Getting to the Heart of God's Design." Cathy dismissed the controversy as a localized incident that was not indicative of the company's corporate culture. "In recent weeks, we have been accused of being anti-gay," Cathy said in a written statement. "We have no agenda against anyone. While my family and I believe in the Biblical definition of marriage, we love and respect anyone who disagrees."