As of last week, the president had played 102 rounds of golf since taking office. According to White House reporter Keith Koffler, each golf outing takes about five hours. Using arithmetic -- something apparently unfamiliar to Democrats, given their staunch refusal to pass a federal budget -- Obama has spent about 510 hours golfing.

This compares to a total of "412 hours ... in economic meetings or briefings of any kind", according to a time study published by The Government Accountability Insititute (PDF). 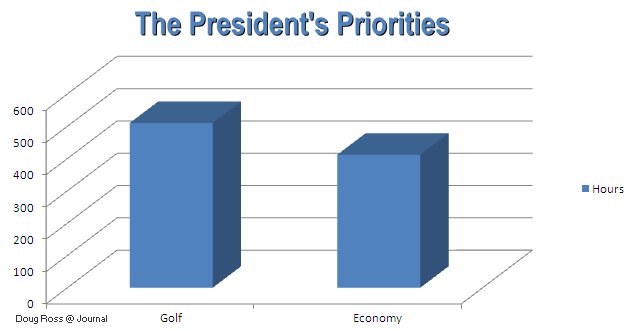 Even discounting his callous disregard for the Constitution, this president has no respect for the American people. He has no work ethic and no interest in the economy.

And please note: I'm not even counting the innumerable fundraisers and pickup basketball games, which also do absolutely nothing for Americans suffering in this, the Obama Depression.


Hat tip: Gateway Pundit and Right Scoop: 'I will not rest'.

at 11:37 AM
Email ThisBlogThis!Share to TwitterShare to FacebookShare to Pinterest
Labels: Democrats, Economy, Obama, Sports

And since a full-time work year is 2000 hours, you can say the President spends 25% of his time ---playing golf!

A round might take 5 hours to complete but there's travel, prep time and wind down time-19th hole anyone?-for a 102 total round total, I believe an additional 102 hours is conservative.

What a freaking douchenozzle.
MM

Great post!
I think the height of each of the 3-D bars need to be increased. They don't really match the numbers given above the chart.

(Anonymous: If Obama played some of those rounds on the weekends, would you count those hours towards his 2000 hours? -- No, I'm not defending Obama; I just don't agree with your mathematical assessment. Well, I might agree with the douchenozzle part.)

If this represents the President's laser-like "focus" abilities, then perhaps it also explain why Ozymandias-on-the-Potomac's medical records are only offered to us in gist form, lest they disclose the near "legally-blind" degree of his Marxist myopia.