Romney: Uhm, dude. It's WE who PAY for government.

I don't know who this Romney fellow is, but based on his off-the-cuff quote on the Kudlow show (seemingly stated without teleprompters), I like the cut of his jib.

LARRY KUDLOW: “Why do you think President Obama, what did he mean, if you've got a business, you didn't build it, someone else made that happen?

He claims it's being taken out of context. What do you think it means? Do you think this is Obama anti-business, anti-entrepreneur? Or do you think maybe he has been treated unfairly?” 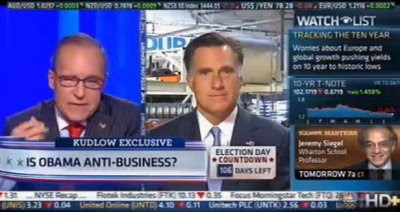 GOV. ROMNEY: “Well, just read the whole speech. I found the speech even more disconcerting than just that particular line. The context is worse than the quote. The context, he says, you know, you think you've been successful because you're smart, but he says a lot of people are smart. You think you've been successful because you work hard, a lot of people work hard.

This is an ideology which says hey, we're all the same here, we ought to take from all and give to one another and that achievement, individual initiative and risk-taking and success are not to be rewarded as they have in the past. It's a very strange and in some respects foreign to the American experience type of philosophy. We have always been a nation that has celebrated success of various kinds. The kid that gets the honor roll, the individual worker that gets a promotion, the person that gets a better job. And in fact, the person that builds a business. And by the way, if you have a business and you started it, you did build it. And you deserve credit for that. It was not built for you by government. And by the way, we pay for government. Government doesn't come free. The people who begin enterprises, the people who work in enterprises, they're the ones paying for government.

So his whole philosophy is an upside-down philosophy that does not comport with the American experience. And if we want to get people working again--and that's my priority--if we want to get people working again, we have to celebrate success and achievement and not demonize it and denigrate the people who have worked hard, who are smart, who have made the kinds of investments to build a brighter future.”

The follow-up question should have been: if the context is worse than the quote, why focus on the quote taken out of context?

How incredibly bizarre that in the United States today we have one presidential candidate running on a pro-Capitalist platform against an incumbent Marxist and there is some question on who will win. Insane.

That quote WAS the context of the speech. Did you not comprehend what Romney was saying? Or are you simply having a hard time grappling with the idea that Obama is a communist? The collective is more important than the individual. That's the context. Any questions?