My, my, my: this may explain why Debbie Wasserman-Schultz won't release her tax returns 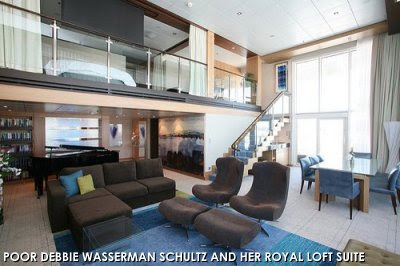 In a stunning case of "turnabout is fair play", Democrat National Committee Chairperson-woman-man Dee Wasserman Snider has been silenced quite effectively after her calls for Mitt Romney to release all of his tax returns since 1917. Turns out that she has refused to release any of her recent tax returns.

Javier Manjarres, writing at The Shark Tank, arrives at a possible explanation for DWS' abject refusal to release her own tax data.

• On a recent 7-day cruise, Manjarres estimates that DWS spent between $17,000 and $33,000 housing her family in a two-story "Royal Loft Suite" equipped with spiral staircase: "Debbie Wasserman Schultz may be a Member of Congress and the Chair of the DNC, but she’s not the Sultan of Brunei."

So did the Schultz’ pay the full ticket price of the cruise or did they pay for a less expensive boarding arrangement and then receive an upgrade from the cruise ship? If Wasserman Schultz did receive a complimentary upgrade, it’s possible that she would be in violation of the House Ethics Gift Rule.

• Even more perplexing, DWS also appears to have acquired an additional -- and previously undisclosed -- luxury property in New Hampshire valued at more than a half-million dollars. This accompanies her $400,000 home in Florida. 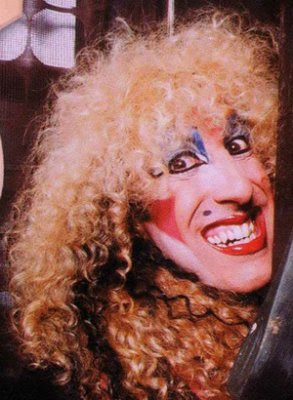 Ah, the tragic, spartan life of a public servant.

Mitt Romney made his money in the private sector.

I wonder how Debbie made all of her money, since she lives on the public dole?

She would never, ever do anything unethical, like -- say -- her parents?

Although in some families, the nut doesn't fall far from the tree.

So what is Dee Wasserman Snider hiding?

I think it is irresponsible and partisan to accuse DWS of getting rich off the Public. There is no proof she has done anything wrong other than take bribes for votes and she has already paid a fine for that. She is a hard working public servant and deserves our respect. The secret properties in NH and her $34,000 Caribbean cruise were probably paid for with laundered money from her father's criminal past. I'm sure it's that simple and she's not still taking bribes.

I don't know anything about magic or how he does it, but the freemercytemple@yahoo.com is on the top of my personal list of "go-to people" when I find myself in a quandry or a dissapointment regarding my love life. That is the most important part of my life, in my opinion, and I was really going through a tough time with my wife of 23 years. It was really rough-going for several years before I finally got the kind of help I needed. I never would have thought I would have gone to a necromancer, but freemercytemple@yahoo.com spell casting service is more than just about "spells": He is a caring, deeply evolved human being with great sensitivity, and if it were not for him, I am totally certain my wife and I would be each other's "ex" on this very day. I love this spell casting helper service for turning my life around!