I refer, of course, to the economy. Or, rather, what's left of it:

GDP Report Worst In Over Year
Friday's Q2 GDP report will offer the most comprehensive picture of how quickly economic conditions have deteriorated, just days ahead of the Federal Reserve's next policy meeting. 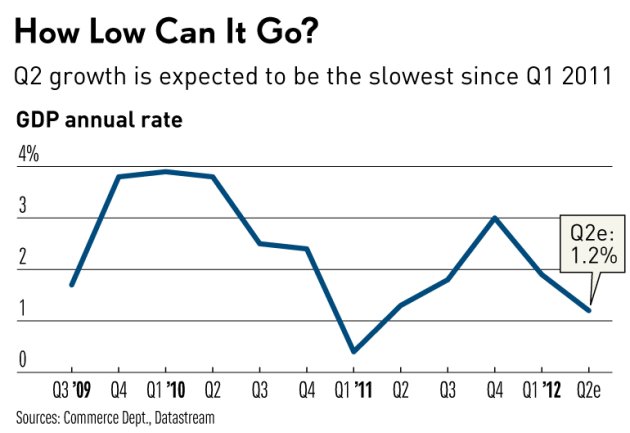 Economists were predicting a second-quarter pace above 2% annualized a few months ago, but the consensus is now 1.2%. That would be the weakest in more than a year and down from 1.9% in Q1 and nearly 3% in Q4 2011.

A GDP rate less than 2 percent is basically nothing. For comparison purposes, the Reagan recovery -- after the height of the Carter recession -- saw GDP growth rates over 7 (seven) percent.

By the way, can I introduce you to my date for Cotillion? Well, it shouldn't be difficult to come up with a corsage that matches her dress.

Word for the wise (from a man who's tried!): You CANNOT fark the krayzee out of them!

Don't get me wrong - it can be a whole lot of fun trying! - but you're doomed to failure!

Hint: Take them to an acquaintance's place while you're house-sitting, and give her HIS name!