Ohio State University student Abdul Razak Ali Artan on Monday morning set off a fire alarm on campus, then drove his car into the crowd of students evacuating the building. Then he jumped out of his car and began stabbing people with a butcher knife. In a departure from the usual denial and obfuscation, Columbus Police Chief Kim Jacobs was refreshingly honest, saying: “I think we have to consider that it is” a terror attack. Leftists took advantage of the occasion to call for gun control, which might have been a cogent argument were it not for one inconvenient detail: Artan didn’t have a gun. But above all, Artan was a “refugee”: the attack vindicates President-elect Trump on Muslim immigration.

Artan was no poster boy for gun control, but he may have been one for the Islamic State, which issued this call in September 2014:

So O muwahhid, do not let this battle pass you by wherever you may be. You must strike the soldiers, patrons, and troops of the tawaghit. Strike their police, security, and intelligence members, as well as their treacherous agents. Destroy their beds. Embitter their lives for them and busy them with themselves. If you can kill a disbelieving American or European — especially the spiteful and filthy French — or an Australian, or a Canadian, or any other disbeliever from the disbelievers waging war, including the citizens of the countries that entered into a coalition against the Islamic State, then rely upon Allah, and kill him in any manner or way however it may be….If you are not able to find an IED or a bullet, then single out the disbelieving American, Frenchman, or any of their allies. Smash his head with a rock, or slaughter him with a knife, or run him over with your car, or throw him down from a high place, or choke him, or poison him….

Intriguingly, before his jihad attack, Artan demonstrated that he knew well how to play the victim card. He appeared in Ohio State University’s The Lantern, in a feature entitled “Humans of Ohio State.” In it, he spoke about being “scared” about performing his Islamic prayers in public:

I just transferred from Columbus State. We had prayer rooms, like actual rooms where we could go to pray because we Muslims have to pray five times a day. There’s Fajr, which is early in the morning, at dawn. Then Zuhr during the daytime, then Asr in the evening, like right about now. And then Maghrib, which is like right at sunset and then Isha at night. I wanted to pray Asr. I mean, I’m new here. This is my first day. This place is huge, and I don’t even know where to pray. I wanted to pray in the open, but I was kind of scared with everything going on in the media. I’m a Muslim, it’s not what the media portrays me to be. If people look at me, a Muslim praying, I don’t know what they’re going to think, what’s going to happen. But, I don’t blame them, it’s the media that put that picture in their heads so they’re just going to have it and it, it’s going to make them feel uncomfortable. I was kind of scared right now. But I just did it. I relied on God. I went over to the corner and just prayed.

Abdul Razak Artan, “third-year in logistic management,” is dead now, so The Lantern can’t go back to him and ask him if he understands better now why people might be nervous about Muslims praying, and why it isn’t just the fault of “the media.” 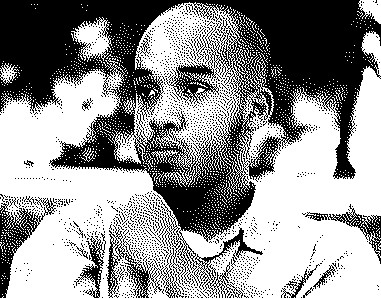 In a Facebook post, Artan played the victim again, but sounded a more ominous note. He referenced jihad mastermind Anwar al-Awlaki and declared: “I am sick and tired of seeing my fellow Muslim brothers and sisters being killed and tortured EVERYWHERE. … I can’t take it anymore. America! Stop interfering with other countries … [if] you want us Muslims to stop carrying lone wolf attacks.”

Meanwhile, Artan’s attack shows the wisdom of President-elect Trump’s call for a temporary moratorium on immigration from countries that are hotbeds of jihad terror activity. KARE11.com reported that “Artan was a Somali refugee and Ohio State student who left his homeland with his family in 2007. They lived in Pakistan before coming to the U.S., where Artan became a permanent resident in 2014.” Somalia and Pakistan: two epicenters of the global jihad. If Trump’s proposal becomes American law, Abdul Artan would never have entered the United States, and Monday’s jihad attack at Ohio State University would never have happened.

There is abundant evidence that admitting Muslim refugees is a jihad risk. In February 2015, the Islamic State boasted it would soon flood Europe with as many as 500,000 refugees. And the Lebanese Education Minister said in September 2015 that there were 20,000 jihadis among the refugees in camps in his country. Meanwhile, 80% of migrants who have come to Europe claiming to be fleeing the war in Syria aren’t really from Syria at all.

So why are they claiming to be Syrian and streaming into Europe, and now the U.S. as well? An Islamic State operative gave the answer when he boasted in September 2015, shortly after the migrant influx began, that among the flood of refugees, 4,000 Islamic State jihadis had already entered Europe. He explained their purpose: “It’s our dream that there should be a caliphate not only in Syria but in all the world, and we will have it soon, inshallah.” These Muslims were going to Europe in the service of that caliphate: “They are going like refugees,” he said, but they were going with the plan of sowing blood and mayhem on European streets. As he told this to journalists, he smiled and said, “Just wait.”

All nine of the jihadis who murdered 130 people in Paris in November 2015 had just entered Europe as refugees. And now the same murderous impulse has come to Ohio State University, courtesy of another “refugee.” How many more such jihad attacks must there be before the wisdom of a moratorium on immigration from jihad hotspots is universally recognized?

This terrorist showed the only way Islam can truly "coexist" in the rest of the world.

What’s a kuffar? You are.