It's not a story out of the Soviet Union though Oleg Atbashian, an artist, activist and commentator, had gotten in trouble for defying the authorities there too.

"Back in my Soviet dissident days, when I was collecting signatures in defense of Andrei Sakharov, I was screamed at, threatened, and lectured by the KGB and Communist funcionaries. What I never imagined was that in the United States, the land of the free, I would not only be subjected to similar treatment, but go to jail," Oleg writes.

But that's exactly what happened to him.

Oleg's mixture of art and satire took off with Communists for Kerry. He's the mastermind behind The People's Cube and his tweaking of the radical left and  its alliance with Islamic terrorists allowed him to continue the same fight he had pursued in the days of the Soviet Union. But as the US comes to resemble the USSR, political satire and activism carries a serious price.

This is what happened to Oleg when he put up some of his Freedom Center posters challenging the anti-Semitic environment created by the left's alliance with Islamic terrorists on campus. 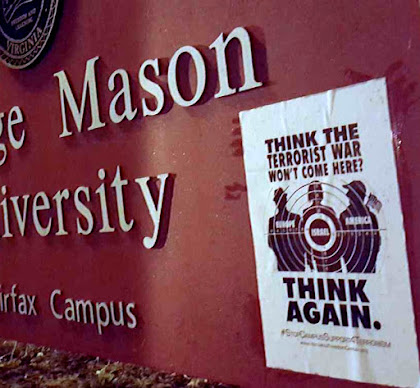 This was supposed to be a two-day poster campaign, to counteract the George Mason University hosting an official national conference for Students for Justice in Palestine (SJP), which is an anti-Semitic organization with well-documented ties to Hamas - a terrorist group whose stated goal is to exterminate the Jews. The GMU poster campaign was conceived by the David Horowitz Freedom Center.

My part in it was to create provocative artwork for the posters and to hang them around the GMU campus, as well as to distribute flyers in order to raise awareness among the students, faculty, and the administration about the true meaning of their support for the SJP conference.

On the first day, my friend and I placed a few stickers on walls, poles, and signs around the GMU campus. We also placed paper flyers inside and outside the university buildings. We had decided to hang the larger posters on the following night, right before the start of the SJP conference.

Arriving at the campus in the evening, we noticed a large police presence everywhere, including the campus Starbucks. From what we overheard at the tables, the police were on the lookout for people posting "disturbing" flyers. At one point we considered canceling our mission due to this higher risk, but then decided to hang a few posters in new locations, in order to get the message out more effectively.

We only had time to hang three large posters when, at about 4am, our car was pulled over by a GMU PD cruiser with flashing lights. As we found out later, they already had a description of our rental KIA Optima. Officer M.J. Guston and his female partner, Officer Daniels, requested to see our drivers' licenses, which they took away. Then they inquired if we had any weapons and proceeded with the visual search, noticing our bucket with mixed wallpaper paste and some rolled posters on the back seat, covered with towels.

The police officers took pictures of the contents of our car and retrieved some of the loose fliers from the floor as evidence. They claimed that since we were covering the posters and flyers with towels, we intended to conceal our wrongdoing. We explained that the towels were needed to wipe our hands, to prevent the bucket from spilling, and to stop the papers from rolling around the car, which was the honest truth.

The story sounds Kafkaesque. But it only gets more so.

Officer Daniels told us that the content of our posters was violent and disturbing to some students, especially the one with the Hamas terrorist standing in pools of blood over his dead victims. Such interpretation flipped our message on its head entirely, turning it from sympathy for the victims of violence into a threat of violence.

Since they couldn't find any weapons and our message was protected by the First Amendment, the officers decided to charge us with "destruction of property worth of at least $2,500," which was a "class 6 felony." They claimed we had "super-glued" our fliers to school signs and it was impossible to peel them off.

It didn't matter that we never used permanent glue, or that there could be other volunteers on campus who posted the stickers they could have downloaded online. Our wallpaper paste was made of wheat and water; we only used it on three large posters, which could be easily removed with water and would be washed off by the first rain. The rest were stickers, printed on regular self-adhesive paper found in any office store.

The intent was quite clearly punitive. The goal was to make GMU safe for Islamic terrorists and anti-Semites.

The magistrate's decision was quick:  $8,000 bail for each of us and a mandatory court hearing within several days. As we were led away to be processed into the system, Officer Guston said, somewhat triumphantly, his final words to us: "You can't come to GMU ever again."

That's the goal. It's doubtful that this much momentum and energy had been invested without pressure from George Mason University. Which means that GMU should be held accountable for it.

Our posters contained a hashtag, #StopCampusSupport4Terrorism. The just and moral choice here is clear to any decent human being. But when political correctness comes into play, morality becomes blurry and justice switches the polarity. As a result, terrorist supporters ended up having a safe space and vigorous protection, while their non-violent opponents were subjected to brutal force, thrown in jail, and were robbed blind by the system.

When Steven Salaita lost his cushy academic gig for celebrating assault on Jews, the media turned out vocally in his support. But when George Mason University calls out the dogs for protests against anti-Semitism and does its best to intimidate and brutalize a Soviet dissident, there is a great echoing silence. The only mainstream media story on these events quotes "officials" claiming that there was $2,500 in damage. That's nonsense. As we've already seen.

The actions of GMU and its campus thugs need to be challenged. The alternative can be seen above.