TRUMP DERANGEMENT SYNDROME: Democrats believe in democracy only until they lose an election

Like all dictators, the Democrats believe in democracy only until they lose an election.

And then they lose their minds.

The last time a national mental breakdown this severe happened was sixteen years ago when Bush beat Gore. The Democrats reacted gracefully to their defeat by insisting that they didn’t really lose because Bush stole the election. Psychiatrists were soon tending to lefties suffering from depression. Others protested outside the Florida Supreme Court, President Bush’s home and their parents’ basement.

Jesse Jackson accused Republicans of a “coup.” Congresswoman Eddie Bernice Johnson warned that "without justice there will be no peace." Thousands protested Bush’s inauguration waving signs like, “We want Bush out of D.C.” and “You’re not our president.”

The Congressional Black Caucus tried to obstruct the certification of the Electoral College vote. Then when Bush won again in the next election, they did it all over again. Expect them to try it one more time. 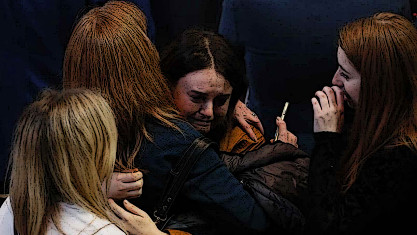 #NotOurPresident on Twitter quickly gave way to riots in major cities. Democrats in the affected cities decided that the riots were a great idea even though it was their own police that were being attacked.

Mayor Bill de Blasio, New York City’s radical leftist boss, claimed that “more disruption… will change the trajectory of things”. Even though the only trajectory that the protests have changed thus far is New York City traffic. “The more people fight back, the more it takes away his power,” he insisted.

Wiser heads on the left recognized that messing up Manhattan traffic wouldn’t stop Trump from taking office. Instead they decided to abolish the Electoral College. Senator Boxer will introduce a bill to that effect. Bernie Sanders mumbled that it’s time to rethink it. Michael Dukakis fired off an angry email insisting that Hillary Clinton had won and that abolishing it should be a top Democratic priority.

Rank and filers weren’t interested in waiting to abolish it tomorrow. They skipped right to trying to rig it today. Over 4 million people have signed a petition titled, “Electoral College: Make Hillary Clinton President on December 19”. Because that’s just how they think elections should work.

Efforts were made to contact Electors directly urging them to hijack the election. Idaho Secretary of State Lawerence Denney said that the Electors were being harassed with "insults", "vulgar language" and "threats". One Elector reported that his cell, home phone, email and Facebook were targeted.

“They’re just trying to steal this thing,” he said.

The Electoral College is undemocratic. Unless you’re a Democrat asking it to undemocratically hijack the results of a state election while depriving its voters of political representation.

Some Democrats despaired of stealing the election and tried to steal the Supreme Court instead. There were revived calls for a Supreme Court recess appointment. There’s a petition, a Saturday Night Live punch line and a bizarre effort by Democratic Senator Jeff Merkley to move the nomination forward.

Merkley claimed that Trump has “no right to fill” that seat and that the Supreme Court seat was stolen.  "We need to do everything we possibly can to block it," he insisted.

What does that mean? How about a permanently deadlocked Supreme Court?

A Slate writer urged that, “the only way to answer nihilism is with nihilism of our own.”

“Obstruct the nomination and seating of any Trump nominee to fill Scalia’s seat,” she urged. “We will lose. But that’s not the point now… If Democrats can muster the energy to fight about nothing else, it should be this.”

A permanently deadlocked Supreme Court doesn’t sound like much of a plan. But Trump Derangement Syndrome means embracing nihilism. And it’s downright rational compared to the celebrity meltdowns as TMZ’s finest cope with the blow to their egos of an election that showed they didn’t matter.

Lady Gaga has been yelling at Trump on and off Twitter. Constitutional scholar George Takei demanded that Obama just appoint Garland. Honorary feminist Joss Whedon declared, “This is simple: Trump cannot CANNOT be allowed a term in office. It's not about 2018. It's about RIGHT NOW.”

What does that mean? It’s a tantrum. It means that baby wants his power and he wants it now.

And it only gets crazier from there.

The outer reaches of Trump Derangement Syndrome include calls to boycott three brands of toilet paper because they’re allegedly made by the Koch Brothers. Never mind that the Koch Brothers weren’t supporting Trump. Facts, like democracy, only matter when they happen to be on your side.

Then there are the ritual burnings of New Balance sneakers on YouTube and Instagram. Not to mention support for the secession of California from the United States of America.

A man has sued Donald Trump for $1 billion for having inflicted “great emotional pain, fear and anxiety on Election Day and beyond.” Students at Cornell held a “cry-in” to mourn the results of the election.  The University of Kansas offered students therapy dogs. At the University of Michigan’s multi-ethnic student affairs center students took comfort in regressing to childhood with coloring books and Play-Doh.

John Hopkins recommended a healing circle. Stanford urged students to “take care of yourselves and to give support to those who need it.” Vanderbilt encouraged them “to take advantage of the outstanding mental health support the university offers.”

At the University of Maryland, an astronomy test was canceled to help students cope with “a personally threatening election result.” A Yale economics professor made his test optional because students were “in shock” over losing an election.  A dozen midterms were rescheduled at Columbia.

One student complained, “Instead of studying for my exam, I was glued to the election update. It's not fair to have a test the following day when something so monumental is taking place, especially when this event is threatening so many groups of people in our country.”

Under all the outraged rhetoric is a narcissistic sense of entitlement. Frustrate it and tantrums happen.

Trump Derangement Syndrome is the tantrum that happens when that sense of entitlement bursts. It’s not a new phenomenon. We saw it with Bush and with previous Republican presidents before him. But as the left’s power has grown, its insular ivory towers have become unable to imagine ever losing it.

Obama maintained the illusion that the opposition didn’t matter by ruling unilaterally. Then in one election the illusion collapsed. The left wasn’t really in charge. There were millions of people across the country in places they had never visited or even heard of who got to decide on all these issues.

That warm comfortable safe space of John Oliver and Samantha Bee viral videos, Buzzfeed stories and social media feeds filled with carefully curated people who agreed with them wasn’t reality. It had been an illusion all along. It was an elitist island that had little in common with that vast geography of people who get their say through the Electoral College. After two terms of getting their way on everything, they woke to a world in which they didn’t matter and which was suddenly no longer catering to their whims.

They don’t really want to abolish the Electoral College, to put Garland on the Supreme Court or to burn New Balance sneakers. What they really want is to get rid of democracy and replace it with a dictatorship. Trump Derangement Syndrome is the tantrum of tyrants.

It’s a real threat to democracy. But that’s what the left has always been.

The hysteria of Trump Derangement Syndrome is the flip side of Obama worship. Both reject democracy and embrace power. They are the illiberal attitudes of a totalitarian movement at odds with America.

The Trump Surge! US Stock Markets EXPLODE since election!