THE FORGOTTEN MAN: No Longer Forgotten?

To those on the East coast or the left coast, the rest of the nation is merely “fly-over country.” It’s comprised of common men and women who work hard, want to raise their families in a safe and free country, and want the government to quit striving to micromanage their lives. We are the ones for whom the ruling class has nothing but contempt, describing us as a “basket of deplorables.” We represent the “forgotten man” in America. Donald Trump in his victory speech early Wednesday morning declared, “The forgotten men and women of America, will be forgotten no longer.”

Donald Trump not only defeated Hillary Clinton, but symbolically triumphed over the political elite, the media elite, a globalist establishment, a reluctant party, and the governance establishment that tramples the interests and needs of the “forgotten man” for their own aggrandizement. He quashed the motives and means of the arrogant statists who assume unto themselves the nanny role of governing and ruling every aspect of our lives. The results of the election Tuesday constituted an emphatic reply to the ruling elite, “Enough is Enough!”

Eight years ago, candidate Barack Obama promised that he was just a few days away from “fundamentally transforming America.” After ramming ObamaCare down the nation’s collective throat; outlawing Thomas Edison’s life-changing creation; adding ten trillion dollars of debt for our grandchildren to pay for; and hundreds of thousands of pages of regulations to micromanage our lives and our businesses, the “forgotten man” has decided the transformation wasn’t to his liking. Obama has trampled the Constitution, and ignored the plight of the average American, as perfectly depicted in Jon McNaughton’s magnificent painting, “The Forgotten Man.” 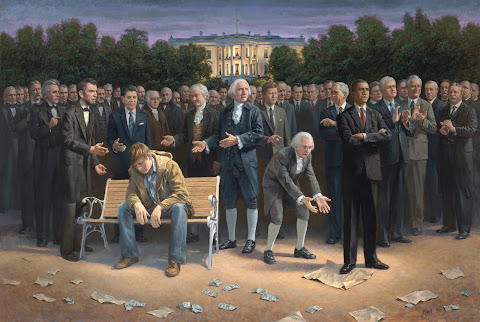 The forgotten man is the average middle-class wage-earner who makes our products in factories, works on farms growing and producing our food, fixes our cars and appliances, builds and repairs our homes, and transports our food and life necessities across the land by truck or rail. They are the ones verbally pandered to incessantly by ostensibly well-intentioned progressive politicians, yet are the ones who end up most adversely effected by their bad policies. Yet they are condescendingly referred to by the ruling elite, the political punditry, and mainstream media as “uneducated white men.” The forgotten man is no less than Hillary Clinton’s “basket of deplorables.”

The fruits of Obama’s promised transformation, and disregard of the forgotten man are clearly evident. We have 8 million more Americans in poverty; 13 million more dependent upon food stamps; the lowest labor participation rate in a generation with 95 million Americans out of the labor force; the lowest home-ownership rate in 51 years; the worst post-recession recovery in modern U.S. financial history; and a 110% debt to GDP ratio, which our own government declares is “unsustainable.”

The forgotten man has been saying for years that the country is headed in the wrong direction. That we’re fed up with the elites who believe they’re above the law and flaunt it. That we want to make choices based on what is best for our families, rather than some bureaucrat or ruler in Washington telling us what’s best for us. That we’re as fed up with totalitarianism within our own shores, every bit as much as the revolutionaries were at the time of our nation’s founding. We want our life, liberty, and property back, at a time when the ruling class in Washington has lost touch, and is oblivious to the plight of the forgotten man.

Over 70% of Americans are dissatisfied with the direction the country is going. 72% feel the federal government isn’t working. Nearly the same percentage claimed in exit polling on Tuesday that they wanted this to change, and 83% of those voters voted for Donald Trump. The forgotten man may no longer be forgotten.

A short five months ago, Britons made a historic vote to leave the European Union. The New York Times described the results of the vote as, “…a blow to the betting markets and the pollsters. It was a rejection of the governing political class and the self-satisfied elite. It was delivered by older, working-class voters in areas of Britain hit hard by globalization, angered by mass immigration, and anxious about their nation’s identity in a borderless world.”

The globalist establishment, governments, global banks and corporations, and cronyistic financial institutions were aghast at the historic vote of Britons, colloquially dubbed “Brexit.” Financial markets collapsed in ensuing trading sessions, only to rebound and rise to record highs when it became obvious the UK would actually be better off, and that the sky was not in fact falling.

I said of that historic vote in July, “People power can beat the establishment if they try hard enough. It worked for the UK, and may carry over to other EU members with their upcoming votes. The U.S. could join that same anti-globalism and anti-establishment wave with a Trump victory in November. Time will tell.” Well, time has indeed spoken, and it was a resounding rejection of globalization and the ruling elite.

The past six years Obama has had a noncompliant congress, which refused to merely bend over and accept his conviction to transform the nation. This regrettably led to the greatest abuse of executive power in U.S. history as he bragged that with his “pen and his phone,” he would continue his statist transformation. The plus side of this is the fact that with the stroke of a pen, a newly inaugurated President Donald Trump can negate and rescind all of those illegal Executive Orders and Presidential Statements.

In spite of his flaws and abrasive ways, it appears Trump was recognized by the forgotten man to be the antithesis of the cronyism and corruption that not only is currently endemic with Washington, but of his opponent. She represented all that is wrong with our federal government and would merely be the perpetuation of Obama’s nanny-state, totalitarian approach to governance in our fair land.

Trump, as a non-politician, has never had to be politically correct. Has never governed, yet having worked the system, recognizes and acknowledges the corruption and divergence from what the republic was intended to be. Those of us whom Hillary characterized as a “basket of deplorables,” Trump championed as the average American, even the forgotten man, who simply wants a growing economy, good jobs, safe borders, law and order, to get the federal government off of our backs and out of the micromanagement of our lives, and a safe place to raise our children and grandchildren. As he said the morning after the election, “The forgotten men and women of America, will be forgotten no longer.”

That seems to be Trump’s intention, even though his approach may seem strident or immoderate. Rhetoric regrettably is often harsh and abrasive in the heat of a campaign, but hopefully that will not be indicative of how he will lead. From the first-hand accounts of those who have worked with him for years, it is not.

It would behoove us all to do as Obama counseled, to make the transition smoothly, unify as fellow Americans with anticipation of real “hope & change” that will make the nation more economically viable and safer, and give him a chance to “make America great again.”

This is a good post and sums up my feelings to a tee.

Will President Trump get us back on the right track? Who knows, but it is better to drown trying to swim in the right direction than to drown by giving up and rolling over to die.

Very good post. You have summed up my feelings too. Well said.