JEFF SESSIONS: An Attorney General to Restore the Rule of Law

I have only one complaint regarding the splendid news that President-elect Donald Trump will nominate Senator Jeff Sessions (R., Ala.) to be the next attorney general of the United States: He is such a valuable legislator, he may be irreplaceable in the Senate.

But that's alright. The Senate is going to be the Senate. Plus, there are talented young conservatives with strong legal backgrounds there, so hope springs that one can step into Jeff's big shoes.

By contrast, the Justice Department, the institution in which I proudly spent most of my professional life as a lawyer, is in crisis. For eight years, we have had not the rule of law but a Ruler of Law - the imperial president, Barack Obama, aided and abetted by his hyper-political courtiers Eric Holder and Loretta Lynch, derelict in the fundamental duty of his office to execute the laws faithfully. 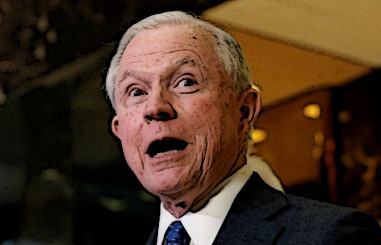 The Obama Justice Department has been the most politicized in the nation's history. It has weaponized the law against the president's political adversaries and scapegoats, while insulating the president's allies against investigation and prosecution. It has made progressive political activism the touchstone of Justice Department hiring, stacking various departmental sections with social-justice warriors who see the law as their arsenal to achieve fundamental societal transformation. It has exploited the legal process as an extortionate tool to shakedown deep-pocketed institutions for the purpose of funding progressive rabble-rousers. It has used law-enforcement to craft political narratives that, for example, propped up Obama's "blame the video" fraud after the Benghazi massacre; framed the nation's financial institutions for the mortgage meltdown, to the exclusion of reckless government policies; and undermined Second Amendment rights while getting federal agents killed (see the "Fast and Furious" debacle, over which Holder was held in contempt of Congress). It has injected racial discrimination into the enforcement of civil-rights laws in blatant violation of the equal-protection principles those laws are supposed to assure. It has exhibited a contempt for Congress and a propensity to obstruct legislative oversight that would have made the Nixon administration blush. It has repeatedly engaged in appalling prosecutorial misconduct and then lied to federal judges to cover it up. It has not only refused to enforce the immigration laws and sued to prevent sovereign states from enforcing them, but has also endorsed the president's claimed power to ignore congressional statutes. It is abetting a war on the nation's police departments, seeking to nationalize them under the guise of baseless and ruinously divisive smears that cops are hunting down African-American men, and that the justice system is rigged against black people.

Senator Sessions, an accomplished lawyer and a good and decent man, is the right remedy for the Justice Department's extreme ailments.

As a highly experienced former federal prosecutor and United States attorney for the Southern District of Alabama, he has great respect for the Justice Department's traditions and its mission of vigorous, apolitical law-enforcement - amply demonstrated by his prosecutions of civil-rights violations that helped break segregation in Alabama's public-school system. Having also been a state prosecutor as Alabama's attorney general, Sessions understands the Justice Department's place in our federal system. He would respect state sovereignty and work cooperatively to support state and local police, not take them over. Finally, as a United States senator for 20 years, he appreciates the necessity of oversight by the people's representatives to keep federal law-enforcers attuned and responsive to the concerns of Americans - crime, terrorism, border security, and threats to our liberties.

Senator Sessions has served our nation well in a wide variety of ways during his Senate tenure. It is on the imperative of enforcing our immigration laws, though, that he most stands out as a notably effective voice, if too often a lonely one.

It has become a tired refrain among would-be grand reformers that "our immigration system is broken." For the most part, however, it is broken because of Washington's unwillingness to enforce the law. When this is pointed out, the reformers habitually resort to caricature, claiming that people who want sensible law-enforcement are calling for mass deportations.

As Senator Sessions knows, sensible law-enforcement means managing crime problems: calculating the right allocation of finite resources so that (a) action is taken against the major offenders, and (b) the laws become sufficiently vibrant that law-breakers are encouraged to cease their criminal conduct and potential law-breakers are discouraged against commencing criminal conduct. That is how a broken system gets fixed.

Is there a compromise to be had among embattled partisans over the status of certain classes of illegal aliens - those who were brought here as children and for whom America is the only home they have ever known, those who assimilate in and contribute value to our society, and who refrain from violating our criminal laws? I think there may be . . . but that compromise cannot be reached until the public is convinced that the borders are secure, the law is being enforced, the economic and welfare interests of Americans have become a priority in Washington, and any compromise is not an invitation to the next crisis.

Those conditions can only be met if the Justice Department returns to its essential role of fortifying the rule of law, preserving the Constitution, reflecting our traditions rather than warring against them, and providing firm but fair enforcement. I am confident Jeff Sessions will be just the kind of restorative attorney general the Justice Department and the nation desperately need.

A version of this piece also appeared on National Review Online..

Indeed, it is the rule of Law or the law of rules.
Little Barry was in bondage to the law of rules, and unqualified to lead anyone to higher ground. A shame really, but everything people saw is what they got.