Republicans on the House Permanent Select Committee on Intelligence are seeking information about the Steele dossier from a former Obama administration official who is married to an employee of Fusion GPS, the opposition research firm that commissioned the dossier.

The Daily Caller News Foundation is told that one of the letters was sent to Shailagh Murray, a former journalist who served as senior adviser to Obama and as former Vice President Joe Biden’s deputy chief of staff.

Murray’s husband is Neil King, a former Wall Street Journal reporter who worked at the newspaper at the same time as Fusion GPS’s three co-founders, Glenn Simpson, Peter Fritsch, and Tom Catan. Murray also worked at The Journal until 2005. She joined the Obama administration in 2011.

King left The Journal in December 2016 after accepting a buyout offer. Politico reported at the time that he was joining Fusion GPS, which is based in Washington, D.C.

House Intel Republicans are exploring whether there are similarities to Justice Department official Bruce Ohr and his wife, Nellie Ohr, according to Fox News, which first reported that Murray was being sent a letter. Bruce met with Fusion’s Simpson shortly after the election to discuss the dossier. Nellie worked for Fusion at the time as a researcher on the firm’s investigation on President Donald Trump.

Fox also reports that a questionnaire was sent to Colin Kahl, who served as national security adviser to Biden. 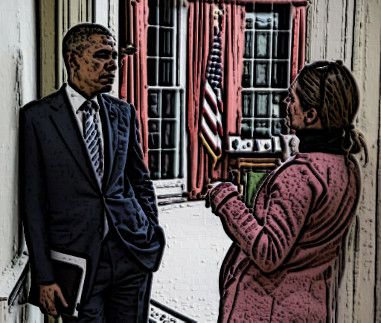 The letters also inquire when the officials learned that former Secretary of State Hillary Clinton’s campaign and the Democratic National Committee funded the dossier, which was written by former British spy Christopher Steele.

Nunes and other Republican lawmakers, including Senate Judiciary Committee Chairman Sen. Chuck Grassley, a Republican from Iowa, have alleged that the FBI and Justice Department abused the Foreign Intelligence Surveillance Act (FISA) Court process by using the dossier to obtain a surveillance warrant against former Trump campaign adviser Carter Page.

The agencies failed to disclose the source of the dossier’s funding and also relied on the document even though it was unverified, Republicans say.

Nunes issued a memo laying out those allegations in January. The memo marked the end of the first phase of his investigation into the dossier. He has since turned his focus on former Obama officials, including officials at the State Department and CIA.

Nunes sent questionnaires in February to a dozen other Obama administration officials, including CIA Director John Brennan and former FBI Director James Comey. Nunes revealed earlier this week that most of the recipients responded to the letters by last Friday’s deadline.