DOJ Response to Peter Strzok Opens a Whole Can of Whoop-Ass on Comey, McCabe and the Lovers

After his firing, disgraced former FBI counterintelligence official Peter Strzok filed a complaint with the Office of Professional Responsibility (OPR) asserting that his proposed termination was unwarranted.

In a recently released response dated August 8, 2018, OPR assistant director Candice M. Will outlined all of the facts underpinning Strzok's termination. Among the findings, Strzok was found to have:

• Engaged in "unprofessional conduct";
• Committed security violations related to the use of personal email for FBI business;
• Committed misconduct regarding a judical proceeding by failing to investigate obvious leads in the Clinton email scandal

The OPR's 27-page response contains several interesting revelations, few of which have been publicized thanks to our Democrat Party media, which has spent three solid years trying to overturn the results of the 2016 election.

One of the most egregious activities Strzok appears to have engaged in is trying to sit on all of the missing Clinton emails, three months of which had never been seen before by government investigators. The Weiner/Abedin laptop seems to have contained most of the missing emails, which Hillary aide Huma Abedin had forwarded to the laptop she shared with ex-Congressman Anthony Weiner.

Furthermore, the Clinton emails recovered from the Weiner-Abedin laptop only came to light because an FBI field agent in the New York office -- a heroic individual, it seems -- was concerned that the Strzok team was stalling. Recovered in late September, Strzok ignored the agent's revelations, almost certainly hoping that he could get to the election and a Hillary victory, after which concerns with problematic emails would be rendered moot. 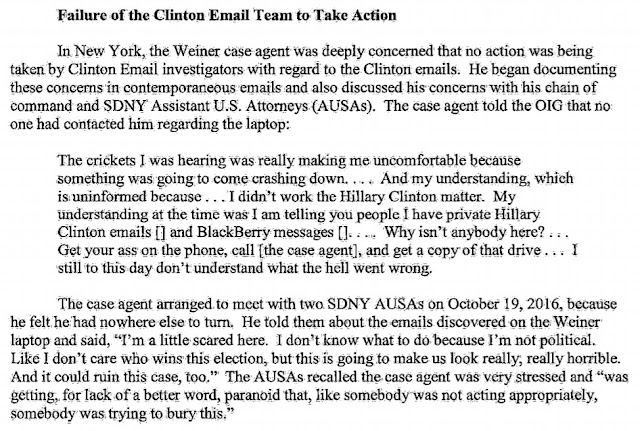 The Suspicious Decisions of Comey and/or McCabe Highlighted

"The investigation revealed that [Comey] and/or [McCabe] inexplicably assigned the same people to the FBI's two most significant investigations at the time, Clinton Email and Russia. This, in turn, meant the people were spread too thin and unable to focus the necessary time and energy needed for proper follow-up investigation on Clinton email."

The implications here are unspoken, yet obvious. Comey or McCabe or both needed politically aligned insiders they could trust completely. Strzok and Page were among the chosen few tasked with exonerating Hillary Clinton's violations of The Espionage Act while entangling Donald Trump in various manufactured scandals.

Did Comey Blatantly Lie to Congress About Hillary's Emails?

After notifying Congress of the newly discovered emails (just days before the election, not about a month or so), Comey then apparently lied to Congress about his review of the documents.

When then-FBI Director James Comey announced he was closing the Hillary Clinton email investigation for a second time just days before the 2016 election, he certified to Congress that his agency had “reviewed all of the communications” discovered on a personal laptop used by Clinton’s closest aide, Huma Abedin, and her husband, Anthony Weiner.

At the time, many wondered how investigators managed over the course of one week to read the “hundreds of thousands” of emails residing on the machine, which had been a focus of a sex-crimes investigation of Weiner, a former Congressman.

Comey later told Congress that “thanks to the wizardry of our technology,” the FBI was able to eliminate the vast majority of messages as “duplicates” of emails they’d previously seen. Tireless agents, he claimed, then worked “night after night after night” to scrutinize the remaining material.

But the DOJ's response to Strzok obliterates Comey's claims. Not only did Strzok fail to review the Clinton/Abedin emails, but the Strzok team violated a federally mandated 'damage assessment' directive, which required referral of "...the matter to U.S. intelligence agencies to determine if national security had been compromised..."

This seems to be just another example of perjury before Congress, a charge which -- for example -- Roger Stone was found guilty, resulting in a possible prison sentence of 50 years.

There will be no justice applied any of the cabal, or it's friends in the Demonicratic Party, and as a consequence, our Republic is dead on arrival.

Muggins said...
This comment has been removed by the author.
1:37 AM

The deep state is in tact, witness the FBI as it continue to slow ball FOIA requests for documents concerning Clinton's emails. Obama weaponized several Federal agencies, like the IRS, FBI, CIA and DOJ. When the Democrats take the White House again, this weaponizing by Obama will be just a rehearsal. The deep state is ready to roll and marginalize the Republican Party with the help of the MSM. The U.S.A. will be a virtual one party state. You will have a political file kept in your name, in Washington D.C.. It amounts to a totalitarian revolution, and when that happens, you are best advised not to get a black mark in your file.

In the recently released movie 'Armstrong', there was some controversy about showing the US flag being planted on the moon. The filmmakers suggested it was not an American achievement, but a global one. Some scientist, tongue in cheek, said that scientifically it has never been proven that anyone but an American CAN walk on the moon...

This is how I feel about indicting the Dems...is it even possible? Can you prove it to me? I think I'll believe it's possible when it happens...

I notice that a comment above has been removed by the author. I am quickly coming to the point where I will be writing comments that I will regret, or think more cautiously about, also, for reasons of self preservation and dismay as to my own thoughts about how renegade this country has become and what actions the situation calls for.
I hope what I wrote was oblique enough but gave a hint.

Do you have a link to the released report?