DEVIN NUNES ON THE FISA COURT: Shut It Down. Shut It All Down. 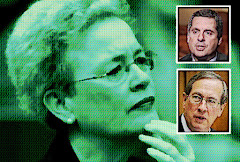 Rep. Devin Nunes (R-CA) is ringing alarm bells about the Foreign Intelligence Surveillance Court [FISC], saying that it is culpable, along with the FBI, for the improper wiretapping of former Trump campaign adviser Carter Page, and needs to be dismantled.

Nunes, the ranking Republican member on the House Intelligence Committee, joined Fox News’ Martha MacCallum Tuesday evening to discuss the FISA court’s tardy rebuke of the FBI’s handling of its surveillance-application process, and for the second time this week, he called for the secret court to be shut down.

In a four page order (PDF) Tuesday, the court’s presiding judge Rosemary M. Collyer gave the bureau until Jan. 10 to come up with solutions, a week after Justice Department Inspector General Michael E. Horowitz issued his scathing report detailing the FBI and DOJ’s misconduct during the Trump–Russia investigation.

“The FBI’s handling of the Carter Page applications, as portrayed in the [Office of Inspector General] report, was antithetical to the heightened duty of candor described above,” Collyer wrote. “The frequency with which representations made by FBI personnel turned out to be unsupported or contradicted by information in their possession, and with which they withheld information detrimental to their case, calls into question whether information contained in other FBI applications is reliable.” 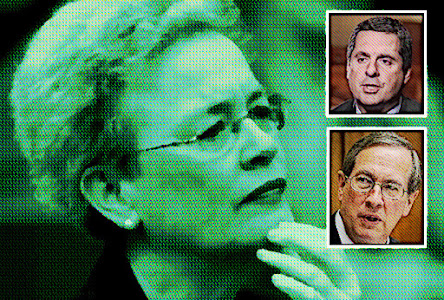 Tuesday night, Nunes argued that it is somewhat disingenuous for Collyer to claim today that she has concerns about fraud upon the court when the House Intelligence Committee notified the court of the substantial errors almost two years ago.

“I’m glad to see the FISC court come out and make a statement but your viewers need to know that the FISC court is also culpable in this madness, and I say that because we sent them two letters—very specific letters,” Nunes told MacCallum.

The California congressman explained that Republicans on the House Intelligence Committee sent Collyer the first letter in February of 2018, informing the court “of very serious matters” that they had found in their investigation. He said the court did absolutely nothing about it. The second letter, he said, was sent in the summer of 2018 after the House GOP found out about the exculpatory evidence the FBI had left off of their FISA applications.

“The point here Martha is the court knew about all of this,” Nunes said. “I’m glad they’ve acted, I’m glad they said something, but the court needs to be ended,” he argued.

The California Republican voiced concern that neither the FBI and FISA judges can be trusted with powerful surveillance powers on Sunday as well, telling Fox News host Maria Bartiromo that the FISA court is in “tremendous jeopardy.”

“We cannot support the FISA court right now,” he said flatly. “The judges are refusing to take action against these dirty cops and dirty lawyers who did this.”

Nunes pointed out that the FISA court is a secret court that can target innocent people like Carter Page who have no recourse. “Look, the American people at the end of the day … we’re not going to give up our liberty in order to have some secret court operate to spy on political campaigns,” he said.

Unfortunately, Nunes noted, the American media helped the government cover up its gross misconduct. “In order to get back to normalcy in this country, we have to have a free and fair press, but we don’t have that today,” he lamented.

When asked by MacCallum whether he believes that the FISA court really needs to be eliminated, Nunes replied, “I’m not going to speak in absolutes, but I will say that the way that the court’s conducted themselves is totally inappropriate. They ignored clear evidence that we presented to them.”

Nunes stressed that the damning information was not yet available to the general public, but the court had it “and did nothing about it.”

According to Nunes, the court was not being entirely truthful when it claimed in the letter that it had just found out about the FBI’s misconduct because he had already tipped them off to the problems.

He said the FISA court’s performance was so bad, “Congress has no choice than to have to go in and fix this process.”

Yes, the FISA Court, in response to over 2 years of chaos and persecution of a duly elected President is tasking the FBI with drawing up new procedures. That's it? That's going to be the extent of it? After all this just an Emily Litella moment? "Never mind!" Nope. They all should be kicked to the curb.

Republicans should DEEM the Court, and the impeachment closed and go enjoy their families. Let dRATS stew like baked potatoes. Seeya in January.

In the Senate hearing with IG Horowitz about the Page FISA, a lot of questions were asked about the FISA and the spying on Americans which the FISA was supposed to prevent spying on Americans— let alone spying on the campaign of the opposition party's Presidential candidate or staff. I’ve always thought common sense would prohibit such spying, but obviously our political elites possess neither common sense or virtues preventing their using Federal employees and foreign intelligence spies from the Five Eyes nations.

No future President should experience the treasonous acts that Obama’s White House, FBI, DOJ, CIA, NSA, State Department, and any other agency that might surface in the future have pulled against Trump.

Great post. Keep it up. Thanks for advice. It is wonderful information for me.
Gas Fire Suppression System

So with all this spying (or surveillance) what information useful for Hillary and the DNC did they pick up?

What was the length and breath of the info collected? Who collected, who shared it and who analyzed it?