THE REAL QUESTION FOR DEMOCRATS TO CONSIDER: Who Will Be Controlling Joe Biden?

As of now, Joe Biden is the strong front-runner for the Democrat presidential nomination. Almost nobody saw that coming. I certainly didn’t, and I apologize for that. How’d we get it so wrong? Mostly because we don’t think like Democrats do.

The Republican Party is a coalition of business interests and conservative ideologues. At its core, it’s about ideas: the Constitution, the free market, and all of the basic principles of western civilization.

The Democrat Party isn’t like that at all. Democrats don’t fixate on ideas. Instead, their base is a constellation of aggrieved interest groups animated by their hostility to traditional Americans. They may not have much in common, but they’re united in their desire to take power and redistribute the spoils to themselves. To achieve that, Democrats know they must stick together, no matter what. Group cohesion is the root of their power.

But we didn’t see it that way. We looked at the Democratic primary field from the outside, and thought: “Is the party really going to nominate a guy with no program, no core beliefs and, by the way, who’s clearly losing it?”

The answer, we learned definitively last night, is... of course they are. Why wouldn’t they? It might work. But hold on.

You’re probably wondering about the most basic question of all: If elected president, could Joe Biden really oversee this complex nation of 320 million people? Judge for yourself.

During Biden’s victory speech last night, he mistook his wife of 43 years for this sister: 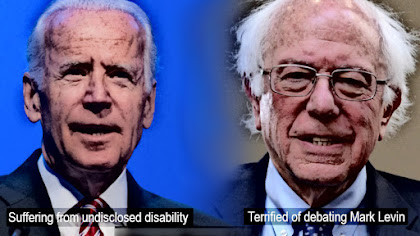 Apparently some practical joker hid his wife. As a smart friend said last night, “Joe Biden has spent his entire life trying to succeed in presidential politics. Now he has. Too bad he’s not there to enjoy it.” Pretty funny.

But to the cynical and darkly clever people who run the Democratic Party, Biden’s fading intellect isn’t a handicap. It’s an opportunity.

Joe Biden is weak, and he’s getting weaker. Ask anyone who knows him, or who’s watched him carefully over the past 50 years. Biden is noticeably more confused now than he was even last Spring, when he entered the race.

Why is this good news for the Democratic establishment in Washington? Because it means they can control him. That’s one reason the other candidates were so eager to swing in behind Biden the instant he won a state:

KLOBUCHAR: I am ending my campaign and endorsing Joe Biden for president.

BLOOMBERG: Uniting behind the candidate with the best shot to do it my friend and a great American Joe Biden.

BUTTIGIEG: I am delighted to support and endorse Joe Biden for president.

BETO: I will be casting my ballot for Joe Biden.

And it wasn’t just Democrats. The entire so-called "resistance", angry former Republicans, jumped on board immediately: Bill Kristol, Ana Navarro, Jennifer Rubin, and that weird little guy who was Jeb Bush’s spokesman in 2016. They were thrilled by Biden’s rise.

They know Biden will green-light their pointless foreign wars, no questions asked. And then, because the day couldn’t get more predictable and hilarious, James Comey himself sent a supportive tweet.

All of these people are happy for the same reason: Joe Biden is fading and uncertain. Weak leaders are vessels for the stronger forces around him. And no force in American politics is stronger — more aggressive and better organized — than the narrow little interest groups that make up the Democratic coalition. There’s a reason Gov. Ralph Northam of Virginia swung far so far from the center after he was caught wearing a Klan costume. Northam was badly wounded, on the brink of resigning. Democratic interest groups swooped in and took control of his administration. Now, it looks nothing like it once did.

As if on cue, one of the first things Joe Biden did after winning the South Carolina primary on Saturday was pledge to put Beto O’Rourke in charge of his gun policy:

BIDEN: I want to make something clear. I’ll guarantee this is not the last you’ve seen of this guy. You’re going to take care of the gun problem. You’re going to be the one that leads that effort. I’m counting on you.

Beto is going to quote, “take care of the gun problem.”

How exactly is he going to do that? O’Rourke has promised to seize the rifles of law-abiding Americans by force, with armed federal agents. Oh, this wasn’t a throwaway line. O’Rourke has said it repeatedly.

Biden and Beto represent the most extreme position on gun control ever articulated in American politics. Because it’s the position of the powerful Democratic interest groups that control him. In other words: Don’t expect a Biden presidency to be moderate — not because Biden himself is a wild-eyed extremist. He’s clearly not. He’s a doddering old man who grins a lot. But Biden is infinitely malleable. He assumes the form of whatever surroundings he finds himself in, like an invertebrate. Here he is revealing that, actually, he’s just as Southern as ol’ Col. Sanders. Just give him a white suit and a string tie:

BIDEN: If Democrats nominate me, I believe we can beat Donald Trump.

This is a man willing to say virtually anything.

Hard-eyed extremists in the party will use Biden as their instrument from the first day. And not just on guns. On every issue: Immigration. Health care. Taxes. Judges. Esoteric social issues so bizarre, you didn’t know they existed. Biden is 77-years-old. If elected, he’d be 78 on Inauguration Day — almost ten years older than Ronald Reagan was when he was first sworn in. Biden is acutely aware of this. That’s why he’s always talking about push-ups and challenging other people to fist-fights.

Joe Biden is insecure, and that makes Biden susceptible to the worst people in Democrat politics.

So what are the political lessons of last night? The first is that the Democratic establishment is far stronger than the Republican establishment.

Not to mention far bigger. It’s in a different category from what the Right has. It extends far beyond four cable shows, a cluster of DC think tanks and a few low-circulation magazines. We’re almost through the first term of the Trump administration, and Democrats still operate virtually ever lever of power in this country. They control finance, big business, the tech sector, the news media, academia, and the vast federal bureaucracy — including, unfortunately, the Pentagon and the intelligence and law enforcement agencies. Every power center in America is arrayed against Donald Trump — and we’d add to that list, the government of communist China, which would badly like to return to the compliant American leadership of yesterday. All of these groups will be working tirelessly for Joe Biden. They’ll use whatever tools they possess, some of them public, many not. Above all, they’ll have the media, which needless to say is already playing its prescribed role:

DON LEMON: What a night! This is like a dream... What a night it has been for Joe Biden! What a race it’s been, unbelievable. I took a nap because I knew I would be up late. And I woke up and I thought I was still dreaming.

By November, they’ll be telling you that Joe Biden is an internationally-ranked chess champion who can cure baldness. Many people will believe them. That’s the thing about propaganda: it works.

Republicans should be concerned about this. Look at the Democratic turnout numbers from last night. They were historic. In some places, they seemed to defy physics. What does this suggest? That there are a lot infuriated Democrats out there. They’re not in the mood for compromise. They’re apt to believe anything, including that Joe Biden can beat Orange Satan and solve their personal problems.

Don’t expect Bernie Sanders’s to stand in the way of Biden’s path, not for long anyway. Sanders plays the maverick, but it’s pretty clear he doesn’t have the stomach to buck his party. Hillary Clinton’s DNC rigged the primaries against him four years ago, but Sanders still dutifully endorsed her — and campaigned for her — once she inevitably won the nomination. Even today, just hours after he lost his final chance at the White House, Sanders refused to call Joe Biden what he is: a corporate shill tasked with dragging the party back to 2009. Instead, Sanders went out of his way to praise the longtime puppet of the credit card companies as a man of high character:

BERNIE SANDERS: I like Joe, Joe is a decent guy and I do not want this campaign to degenerate into a Trump type effort where it's personal attacks. That’s the last thing this country wants.

That’s not how you get elected president. It doesn’t look like Bernie will.

Like so many true believers, he is more comfortable losing than winning. It’s hard to imagine Sanders throwing a scene at the Milwaukee convention to prevent the Obama restoration. With Bloomberg out, and Warren humiliated, there’s nothing left to stop Biden’s ascent to the nomination.