The active shredding of America’s established constitutional norms continues apace. The latest culprit is Senate Minority Leader Chuck Schumer (D-NY). Standing on the steps of the Supreme Court, he issued a chilling, direct threat to two sitting justices, Neil Gorsuch and Brett Kavanaugh. He deserves broad condemnation. He received it only from Republicans. Save for some prominent lawyers, Democrats remained silent.

Schumer told a cheering crowd, “I want to tell you Gorsuch. I want to tell you Kavanaugh. You have released the whirlwind, and you will pay the price!” The crowd was rallying for abortion rights as the Supreme Court heard a case on that issue. The minority leader was there to support them, a perfectly legitimate political act. What’s illegitimate is his call to arms, his over-the-top threats. Schumer concluded by saying the two justices “won’t know what hit them” if they decide the wrong way.

Could a US politician’s behavior get much worse? Actually, it could.

Schumer doubled down when he was rebuked. It took him a full day, some tongue-lashing on the Senate floor, and doubtless some phone calls behind the scenes for him to admit he was wrong.

There’s nothing wrong with taking sides on the abortion issue, nothing wrong with speaking to the rally outside the court building, nothing wrong with saying that Democrats want to appoint judges who support women’s reproductive choice and Republicans don’t. What is wrong is threatening the justices and then reiterating one’s position after being called out. Those comments challenge both the independence of the judiciary and the safety of all public officials. It is particularly disconcerting that the comments came from a trained lawyer who ranks alongside House Speaker Nancy Pelosi as the country’s highest Democratic official. 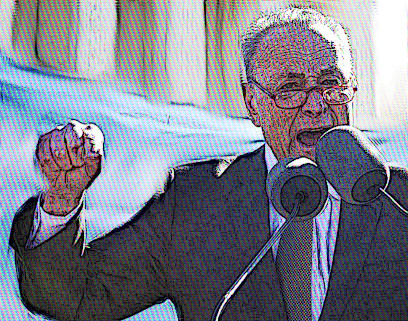 Schumer’s initial statement so disturbed Chief Justice John Roberts that he did something extraordinary. He publicly rebuked the senator. A year earlier, he had similarly rebuked President Donald Trump for depreciating a lower-court decision by attributing it to an “Obama judge.” (Candidate Trump had said something far worse in 2016, calling out a federal judge for his Mexican-American heritage. Fortunately, there was near-unanimous condemnation for that remark.)

After the president’s comment about “Obama judges,” Chief Justice Roberts issued a strong statement defending the courts: “We do not have Obama judges or Trump judges, Bush judges or Clinton judges. What we have is an extraordinary group of dedicated judges doing their level best to do equal right to those appearing before them.”

In fact, there are ideological judges—increasingly so; and, on the federal bench, their ideologies are likely to track those of the presidents who nominated them. That obvious point is now prominent in elections and in coverage of controversial decisions. News stories now routinely identify which president appointed presiding judges. That’s relatively new, and it is not the media’s fault. After all, many decisions do reflect judges’ political leanings, and readers understandably want to know if they do. Now that ideological politics suffuses Americans’ shared experience, it inevitably suffuses their understanding of court decisions too. That is a disturbing development that could diminish public acceptance of court decisions.

Schumer’s threat is another long leap into this deep and dangerous ideological chasm. It comes on the heels of Justice Sonia Sotomayor’s leap in the same direction: her personal attack in a dissenting opinion on fellow justices for siding with the Trump administration in overturning nationwide injunctions. Of course, all these controversies follow the scorching, uncorroborated attacks on Kavanaugh’s nomination, launched only after his confirmation appeared certain.

Schumer’s threats are far worse than “bad manners,” like the disgusting tweets of people who wish Justice Ruth Bader Ginsburg ill. At least those comments are made by private citizens. Imagine if those horrid thoughts had been uttered by Senate Majority Leader Mitch McConnell. There would be national outrage, and rightly so. There ought to be similar, bipartisan outrage at Schumer. Instead, his violation of basic norms is downplayed by a national media that is itself now seen as partisan and untrustworthy. Trump has made that mistrust of mainstream media a major theme of his populist rallies, shredding still more norms by repeatedly calling out “fake news” and labeling the press the “enemy of the people.”

Just as Trump’s reference to Democratic and Republican judges treads on dangerous ground—but was obviously accurate—so too does Schumer tread the same ground (and make similarly accurate statements) when he says that court decisions about abortion are controversial and divisive. The danger is not in expressing that view, but in making direct threats on judges who decide cases “the wrong way.” It didn’t help that Schumer delayed his apology until he couldn’t stand the political heat.

Even his apology was problematic: “I shouldn’t have used the words I did,” he said, “but in no way was I making a threat.” Actually, he was making a threat. His comments were not vague, political ones, as he initially claimed. He pointed directly at the court behind him, where the judges were sitting, as he called out Gorsuch and Kavanaugh by name and warned them that they would pay a price.

Some Democrats meekly defended Schumer by saying his comments are no worse than President Trump’s urging Justices Ginsburg and Sotomayor to recuse themselves from cases involving his administration. Not so. Although Trump was clearly trying to delegitimate their decisions, he didn’t threaten them, and he had a good reason for speaking out. Both justices had entered the political fray, wrongly, when they issued anti-Trump statements (Ginsburg’s in a public forum; Sotomayor’s in a blistering dissent). The president was highlighting their violation of Supreme Court norms. He was saying, in effect, that, “If you want to make partisan statements, then your decisions will inevitably be seen in partisan terms. I will make sure of it.” The larger point here is not who is most at fault, much less who started this mudslinging, but rather that the back-and-forth undermines America’s shared norms of judicial independence.

This nasty tit-for-tat is likely to get worse as the election approaches. After all, control of the federal courts is at stake, and the next president and Senate majority will fill those appointments. Several Supreme Court justices are elderly, and the president might well have openings to fill. And there will surely be numerous openings at the district and appellate court levels. What kinds of judges will fill them is a legitimate topic for political dispute.

In this vituperative, high-stakes battle for the presidency and Senate, it’s important to underscore the norms that buttress America’s judiciary and the separation of powers that surrounds it. For America’s constitutional structure to work, those judicial norms ought to be understood, shared, and promulgated, not undermined by political leaders for partisan gain. It’s fine to promise appointments of “strict constitutionalist” or, conversely, “living-constitution” judges. It’s fine for candidates to say they want to appoint judges who will “uphold your Second Amendment rights” or, conversely, “recognize that reasonable gun restrictions will make us all safer.” The same is true about other controversial issues before the courts. Voters care about those questions, and politicians have every right to say where they stand and what kind of judges they want on the bench. Voters are motivated by those issues.

"He seemed like such a nice man", said the neighbors of John Wayne Gacy and Jeffrey Dahmer. Yet, there lurks in the heart of every Democrat a serial killer: "I was only joking, I'm from Brooklyn".
Yea, Right; this dough tastes pretty good though, what's in it?

Would it not be appropriate to respond to the threat of violence with violence?
Kav should get some of his frat buddies, go over to Schumers place and pound the crap out of him.

So, it's bad for President Trump to come off as a brusk, direct, NY "thug" but just fine for Democrat Senator Chuck Schumer to display the same supposed behavior?

Those darn Liberal Democrats, so hypocritical!

Sweep these hypocritical Dem thugs out in November!

Left judges use "disparate impact" to punish the innocent. Mere statistical differences are taken as proof beyond doubt of purported bias.
That means we can do the same to the Obama judges who issue nationwide injunctions against the president.
The Chief Justice must not defend the indefensible.