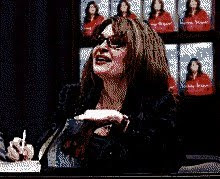 Not only did Massachusetts Senate candidate Scott Brown raise three-quarters of a million dollars in about fourteen minutes, but progressives got another slap in the face from the electorate today.

No doubt due to popular demand and ratings projections, Governor Sarah Palin signed on with Fox News as an analyst. She debuts Tuesday at 8pm on The O'Reilly Factor.

Palin's shock and awe campaign left the liberal pundits shrieking in rage. Most were forced to lay down tarpaulins under their recliners due to sudden soilage. And many a tofu-and-pine nut salad went uneaten as intestinal distress became the order of the day.

• Crook and a Liar: "Palin, who quit her job as Governor of Alaska, fits right in to the right wing stable of wingnuts Roger Ailes has assembled. I wonder why it took so long."

• No More Mister Nice Douche: "Where is she living again? Can she continue to mine "jes' plain folks" from Alaska while living semi permanently in a suburban TV studio in the lower forty-eight?."

• John 'Just Beat It' Nichols: "Maybe it isn't fair to focus on her mean-spirited and ridiculously partisan statements... Maybe it isn't right to harp about her wildly irresponsible assessments of political foes – and even of former political allies... Maybe it isn't wise to note all of her missteps and misstatements as if they are evidence of a cavalier approach to politics and governing... Maybe, just maybe, Palin is doing the best she can."

• Pam's House Blend (Acid, no doubt): "With The News Of Sarah Palin's Hiring, The Derailing Of FoxNews Is Now Complete... All aboard The 'Sarah Palin Train Wreck To Nowhere'!" Shhh, no one tell Pam about the "Nielsens" -- don't be a buzzkill, she's still trippin', dude!

• Mudstuck Flats: "Since her talent for producing copious amounts of fiction that people swallow hook, line and sinker is now manifest, where else could she go? It’s a perfect fit."

• Markos von Kosenjammer: "We all know that Fox News is somewhere to the right of the teabagging hordes and even in non-political stories doesn't have half the journalistic integrity of The Onion. Sure, Fox does its level-best to support the reactionary right, but as the hiring of Sarah Palin demonstrates, Fox is first and foremost a business..." Why yes, Kos, it is. Glad you figured that bit out.

• The Immortal Paul Thornton of Opinion L.A. (no, I haven't heard of him either): "I'm not surprised about the former partial-term Alaska governor's jump to Fox News (it's part of God's plan, after all), nor is much of the blog commentariat. What will be interesting to watch is whether Palin finally receives any on-the-spot pushback should she choose to repeat any of the loony comments she's made on healthcare "death panels" and the authenticity of President Obama's birth certificate. I won't hold my breath." 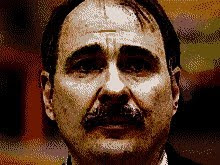 You think the Fox ratings are good now?

I'm predicting that they'll improve. We the people are fed up with central planning "stimulus" packages, secret meetings to nationalize one-sixth of the economy, unconstitutional takeovers of private industry, and "rights" made up from whole cloth.

And Sarah Palin knows that simple fact, which is more than you can say for President Barack Axelrod Obama and the rest of the socialist sycophants.

Doug, if she is a "nobody," a "has-been," or a "political tyro," why are these folk frothing at the mouth about her?

Thanks for the post! It is always nice to hear what the more enlightened among us are saying.

Exploded heads but no gooey mess dur to lack of brains.

Better pick up some shares of FOX if you can. It might be good for this "portfolio" thing I keep hearing about.

Or just buy some and then tell the progs you know about it. Xerox some and tape the copy to the front door, I heard it will deter the undead libs......